Home Get angry and make 'em do it!
WriterSteven T. Jones
SectionPolitics Blog 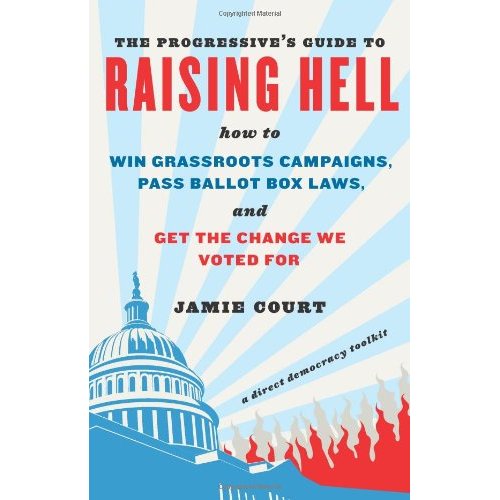 After crashing the country’s economy and turning the world against us, Republicans are clawing their way back into power by stoking voter anger at political and economic systems that are stacked against the common citizen, a tactic that progressives need to adopt if we ever hope to move our agenda forward.

“Anger, not hope, is the fuel of political and economic change,” Jamie Court, head of Consumer Watchdog, writes in his new book, The Progressive’s Guide to Raising Hell: How to win grassroots campaigns, pass ballot box laws, and get the change we voted for (Chelsea Green Publishing, 2010).

Court writes that progressives are rightfully disappointed and disillusioned that after helping to elect President Barack Obama, he and Congressional Democrats turned around and gave Wall Street, the military-industrial complex, and the health insurance companies everything they wanted, with Obama even caving in on requiring all Americans to purchase health insurance, something he opposed as a candidate.

Yet Court said politicians never do the right thing and push progressive political change unless they’re forced to do so. He opened the book with a scene in which President Franklin Delano Roosevelt met with progressive political leaders, listened to their proposals, and then told them, “I agree. I am all for your plan. Now make me do it.”

It’s a concept that the conservative Tea Party movement understands well, and even though they may be crazy and wrongheaded in their utterly unsustainable and destabilizing policy agenda, they have effectively used anger as a political tool, and as a result, the NY Times reports they are poised to wield a disproportionate amount of political power after this election.

It’s the same story on the local level, where the only real anger in this election cycle is coming from those mad at public employee unions and their pension deals, and vagrants who sit uncivilly on sidewalks. These people will keep pushing for what they expect, but many progressives act as if it’s enough to prevent truly heinous Republicans like Meg Whitman from taking power, rather than trying to push Jerry Brown or Board of Supervisors’ progressives from day one to start empowering people over corporations.

“After the vote, power vacuums fill with familiar values, if not faces. Promises give way to fiscal realities, hope succumbs to pragmatism, and ambition concedes to inertia. The old tricks of interest group – confuse, diffuse, scare – prevail over the better angels of American nature,” Court writes, relaying a familiar electoral pattern.

Yet in this election, when the best outcome seems to be simply dodging a bullet, is there any hope for progressive political change? Isn’t the system just too broken? I asked Court these questions when he stopped by the Guardian office for a chat recently, and he retains a belief that with the right kind of tactics and agenda, progressives can still seize the political initiative and power.

“I wrote it to reengage progressives because they are so despondent,” Court told me. “It’s about how to use anger and focus anger…Politicians don’t answer polite mobs, they only answer angry mobs and the Tea Party is the only angry mob in the room.”

Progressive have understandable doubts about the responsiveness of the current political system, but Court said, “I know if we don’t try to make it work, we’re never going to get there.”

And his book lays out the path to get there, step by step, based on some of the legislative and political successes that Consumer Watchdog and other progressives have had in recent years, such as rejecting the well-funded corporate con jobs in Propositions 16 and 17 earlier this year. Yet it involves an approach based on principle and not parties, and with being relentless in pursuing the kind of world we need.

“If you want to fight corporate power, you have to fight Democrats and Republicans,” Court said.

Specifically, Court is calling for progressives to push a California ballot measure that would establish a public health care option here, the very thing that Obama and the Democrats failed to include in their health reform package, and which will dash any hopes of it working if the people are forced to rely on unregulated insurance company products.

“The biggest thing is mandatory health insurance, which is a ticking time bomb,” Court said, one set to go off in 2014 when that aspect of Obama’s health care reform kicks in.

Corporate and political power working together seem to be a force too strong to overcome, but as Court writes, “Public opinion is the most powerful force in the world. While it can be muted, distracted, and co-opted, it cannot be controlled, except by the public.”