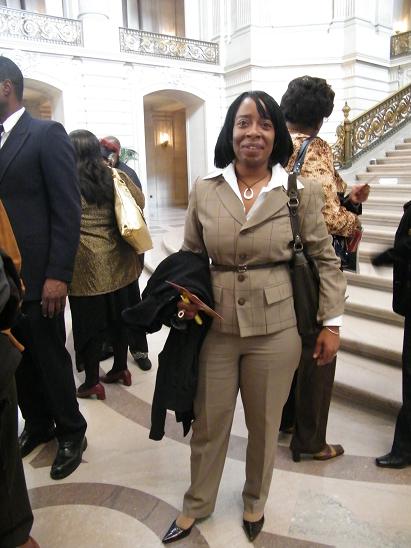 To be honest, I wasn’t surprised that termed-out Sup. Sophie Maxwell endorsed D10 candidate Lynette Sweet yesterday. Just disappointed. And it’s not just because Sweet refused to come into the Guardian this fall for an endorsement interview (a stance that suggests that Sweet would be depressingly inaccessible to reporters that haven’t drunk her Kool-Aid—a stance that, unfortunately, reminds me of Mayor Gavin Newsom’s attitude towards the media).

I’d been hearing rumors that Maxwell was going to endorse Sweet since February, when Sweet, who’d already racked up Mayor Gavin Newsom’s D10 blessing at that point, showed up alongside Maxwell at the city’s kickoff event for Black history month.

Then there was the fact that during an interview in February for the Guardian’s kickoff article about the D10 race, Sweet spouted phrases that sounded eerily similar to Maxwell’s words.
“D10 is a pretty diverse district, but there is only one common thread: the need for economic development,” Sweet told me.

But a few days earlier when I interviewed Maxwell about a third, and ultimately unsuccessful, attempt to recall her , Maxwell talked of common threads:

“I’m waiting for people to have a better understanding of what this community is, what the common thread running through it is, and how to use rank choice voting,” Maxwell said, by way of explaining why she wasn’t willing to endorse anyone that early in the race.

Now, it’s understandable that Maxwell would be looking for a candidate to carry on her legacy. But it she was looking for a moderate black female candidate  then why not endorse Malia Cohen, who isn’t hampered by all of Sweet’s dirty laundry—and has raised the most money in the race, so far?

Could it be that Cohen wouldn’t be down for the kind of dirty deal making that was par for the course back in the days when Willie Brown was still mayor and Sweet was the swing vote that crowned Lennar as master developer at the shipyard/Candlestick Point?

Rumor has it that Maxwell is upset at all the corporate money that’s flooding into this race in support of Steve Moss—and that she asked the other candidates to hold a press conference in which they decry this practice. Rumor also has it that Sweet signaled her willingness to join Tony Kelly, Dewitt Lacy, Chris Jackson and Eric Smith–to name a few–in making such a statement. But it hasn’t happened, yet. And the corporate money keeps rolling in for Moss.

Meanwhile, with three weeks until the election, D10 forums are beginning to sound like a parody of a “Lost” episode featuring a 22-member cast that all claim to represent the city’s polluted and economically depressed southeast sector:

I’m not saying this is wrong. Hell, I love all this diversity of choices. but I am concerned that, come election night, the progressive vote will get split into a million pieces, while deep-pocketed conservative forces like the Chamber of Commerce and Golden Gate Restaurant line up behind one candidate in an attempt to crush candidates that would stand up to their powerful influence at City Hall and truly represent the D10 community

Yes, there is ranked choice voting, and it’s unlikely that one candidate will win a majority of the vote in the first round. But it’s critical at this venture that progressives develop a winning strategy. D10 candidate Ed Donaldson told me recently that if a candidate who doesn’t represent the community’s concerns gets elected, then the community would respond just as they did around Maxwell—and organize a recall.

But wouldn’t it be better if the community can come together behind three truly progressive candidates and help them win the November election?

One of the key challenges in this race will be to win votes in Visitacion Valley, as well as in the Bayview and/or Potrero Hill.

In his latest column in the Chron, former mayor and Sweet supporter Willie Brown alluded to the importance of this in a city with ranked-choice voting:”It’s not getting much attention, but someone has finally figured out how to get the Asian vote out,” Brown observed.”You do it by mail. You get ballots and ballot books into every household, then have the whole family sit down together. The kids help with the translation, everyone talks things over and everyone votes.”

Meanwhile, D10 candidate Tony Kelly told me that Marlene Tran, who is tri-lingual (English, Cantonese, Vietnamese) and has a good handle on community issues in Viz Valley, has confirmed that Kelly is her second-ranked choice (presuming that she votes for herself in first place. of course).

Not a bad strategy–and one that other progressives need to consider, given ranked choice voting–and the brutal reality that they are going to be massively outspent in the next three weeks.