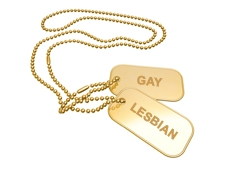 Now that a federal judge has ruled the U.S. military’s “don’t ask don’t tell” policy unconstitutional, President Barack Obama and the Democrats have an opportunity to demonstrate their stated commitment to equal rights for gays and lesbians – and, more generally, their willingness to boldly lead the country. And all they have to do is…nothing.

Actually, if Obama really wants to show some courage on the issue, he would announce that he’s doing nothing – that is, choosing not to appeal the ruling and to simply let it stand – now, before the mid-term elections next month. Sure, that might involve some political risk in conservative districts, but it would also demonstrate to voters on the left that this administration is actually willing to take a stand on an issue that is important to progressives and other believers in social justice.

Part of the problem that Democrats are facing in this election is that the Republican base, all those crazy teabaggers and ill-informed believers that Obama is a dangerous socialist, are fired up, but those in the Democratic Party base – workers, liberals, anti-war activists, and representatives of marginalized communities – don’t have much to cling to these days.

They’ve watched Obama escalate the so-called “war on terror,” do little to challenge Wall Street’s casino capitalism, prop up health insurance companies and call it “reform,” and let conservatives set the agenda while the Democrats dither on issues ranging from raising taxes on the rich to rebuilding the country’s infrastructure and social safety net.

Obama opposes same-sex marriage, and when the Democrat’s made a showy legislative move last month to end DADT, they quickly caved in the face of a Republican filibuster, making the whole gesture seem like a meaningless election year gimmick rather than an honest effort to end a policy that has always been unconstitutional, as this judge has now ruled.

So now, it’s gut check time. Obama needs to show what kind of president he wants to be. Will he do the right thing and finally provide the bold progressive leadership this country needs right now, or will he follow Bill Clinton’s lead and cave in to his conservative critics, maintaining his popularity and winning a second term by triangulating between the left and right, but leaving the country dangerously adrift in treacherous waters.