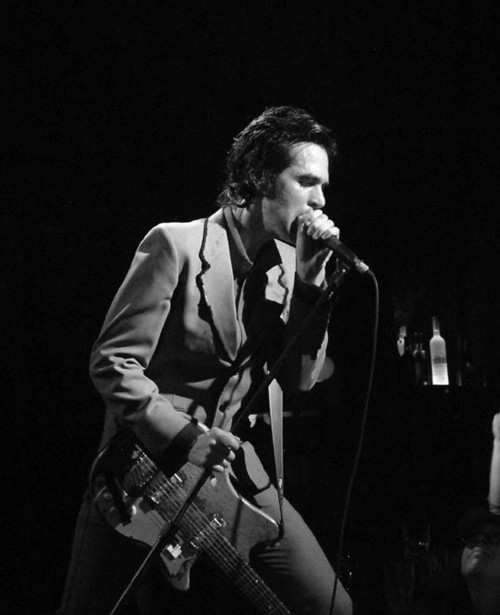 Walking up to Bimbo’s and seeing “Jon Spencer Blues Explosion” sprawled across the marquee in big, bold font, I kept thinking how crazy it was that the group hadn’t performed in SF in over eight years. Though just coming off a five-year hiatus, JSBX has been spewing their sweaty mix of punk, blues, and good old-fashioned rock and roll for nearly two decades. With all three members of the New York trio well on their way into middle age, last Wednesday (9/29/10) was a reminder that these guys were doing their thing long before groups like the White Stripes or the Black Keys were even blips on the radar. And beyond that, it proved they haven’t lost a single step.

San Francisco’s Thee Oh Sees opened the evening with a solid set of psych-rock tunes. Sounding like a Nuggets compilation jam-packed along side-squeals of distortion and reverb-drenched vocals, the band set the table nicely for the evening’s headliners. Frontman John Dwyer led the charge, despite dealing with some mic and guitar technical issues. When the band allowed themselves to stretch their legs, like on a tension-building groove late in the set, their attention to dynamics and song structure really came to the foreground. I kept thinking how much better they’d probably sound while bursting eardrums at a dank basement party, but the more posh confines of the Bimbo’s stage still allowed them to get their point across.

Throughout a nearly two-hour set, Jon Spencer Blues Explosion struck a perfect balance between the fragmented, lo-fi blues-rock deconstruction of its early material and the more accessibly polished version found on later albums. As Spencer and Judah Bauer traded off beefy guitar riffs, it became clear why these guys have never needed a bassist. Spencer’s voice sounded just as awesome as on record, and came complete with his trademark rockabilly-style slapback effect on the mic. Drummer Russell Simins was an animal behind the kit, keeping clockwork-perfect time while maintaining patterns as hard-hitting as they were tactful and funky.

My favorite aspect of the show, however, was the way the set was structured. The band went from song to song with a sense of reckless abandon, one song starting immediately after — or segueing into — another. Only Spencer’s pauses to yell “Blues Explosion!!!” (I swear he must’ve uttered those words 75 times) into the mic broke up the flow now and then. At times, a whole song wasn’t even played to completion before the band would suddenly change gears and start playing something different altogether. It all hung together wonderfully — especially during a particularly memorable transition from “Wail” into 2002’s Plastic Fang highlight “She Said” — and brought across a sense of JSBX’s early reputation for wild spontaneity. Other highlights included early hit “Afro” and Bauer taking over vocal duties for “Fuck Shit Up.”

After blowing through close to around two-dozen songs, the set unfortunately lost some momentum during a 30-minute encore. But with eight years between San Francisco sets, it’s tough to blame JSBX for wanting to get their kicks in as long as they could.