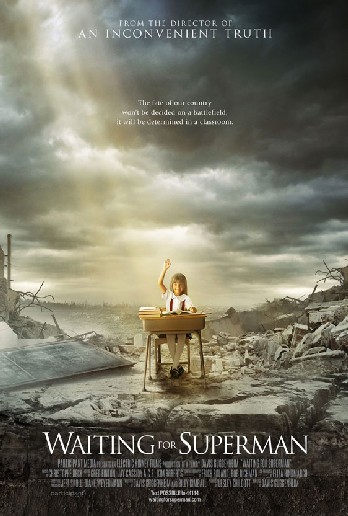 Where do you go from global warming?

Director Davis Guggenheim won an Academy Award for 2006’s An Inconvenient Truth. His latest film, Waiting for “Superman”, takes on the United States’ failing public education system. In some ways, the documentary represents a return to Guggenheim’s first subject. “The very first documentary I made followed first-year teachers, because I believed that teachers were the answer to our schools,” he says. “And I still believe that. Now I wanted to talk about the kids and their families, and what’s at stake for them.”

The kids and families in question are the subjects of Waiting for “Superman”, which follows five young people in search of a better education. While the scope of the film is large — covering the history and bureaucracy that has created this national epidemic — Guggenheim is careful never to stray far from the victims of the crisis.

“The really hard part about it is how complicated this issue is, and it’s hard to simplify it,” he explains. “And I wanted it to be understandable to everybody. Whenever I got lost, I would always bring it back to the kids. It’s a very simple story: five kids, all they want is to go to a great school.”

In the film, Guggenheim looks at the complex situation from several different angles. Some of his targets are predictable — budget cuts and lack of accountability. But he also focuses on areas that might be less familiar to audiences, such as the detrimental effect teacher’s unions can have on schools. While Guggenheim asserts that he is a pro-union liberal, he suggests that teacher’s unions create contracts that make it difficult to deal with many of the problems public schools face today.

“I’m a member of the Directors Guild of America,” he says. “They make sure I get paid properly. They make sure my rights are taken care of. But they don’t tell Hollywood how to make movies, and they don’t protect bad directors.” Guggenheim’s analogy is apt. These unions push for tenure, which most teachers receive automatically after two years. Once they have tenure, it’s very hard for them to be let go — even if they are performing poorly at their jobs.

“I think teachers should get even stronger and demand more pay,” Guggenheim continues. “But they should not have these contracts that keep reform from happening.” Some of the fixes Guggenheim proposes seem like no-brainers. As he points out, the drive behind Waiting for “Superman” is one most people can relate to, whether they’re parents of students directly affected by the situation, or simply compassionate people.

“What’s amazing about public education is that everyone wants great schools,” Guggenheim notes. “It’s not like you’re going to argue that. With global warming, maybe you could argue about whether it’s real or not. But in America, everyone believes in great schools.” On the other hand, we’ve become cynical. We see president after president enter the White House with the promise of education reform. And yet, as Waiting for “Superman” documents, for the most part we’re no better off than we were before. In some areas, we’re worse.

“The problem is, people over time, they give up, because they feel like it’s too complicated, or it’s impossible to fix,” Guggenheim reflects. “And I tried to make a movie to get people to start to care again, and to believe that it’s possible, and to fight so that every kid can get a great education.” Guggenheim sincerely believes in his cause — he sees the documentary as just a jumping-off point for a larger movement. And while it’s easy to feel daunted by the magnitude of the problems our nation faces, he’s confident that things can get better, provided we have the motivation.

“Change can happen really fast,” Guggenheim says. “Before World War II, we could only make a couple planes a year. When we all got excited and committed, we made a thousand planes a year.”  He hopes that Waiting for “Superman” will inspire that desire for change. Guggenheim believes that it’s something we all feel, and that education may simply be something we’ve ignored for too long.

“We’ve been not wanting to deal with our schools,” he says, “and I think we could jump right in. The solutions are there.” But he’s also clear about what it takes: “We’re not gonna fix our schools unless everyone is outraged, and everyone demands that all of our schools work.”