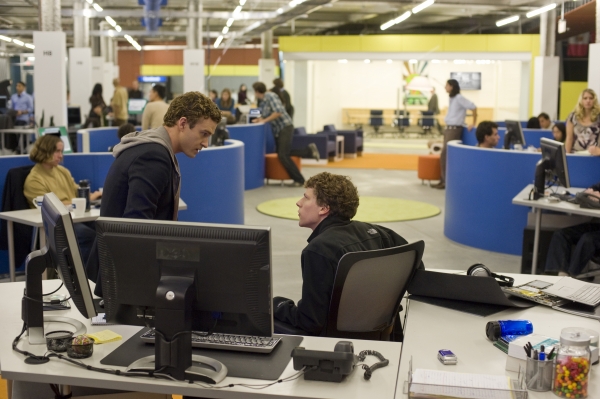 Based on the founding of Facebook and Ben Mezrich’s book The Accidental Billionaires, The Social Network has already received rave reviews from critics. I offer no dissent: the film is unquestionably one of the year’s best. I recently spoke to three of its lead actors — Jesse Eisenberg, Andrew Garfield, and Armie Hammer — and screenwriter Aaron Sorkin.

Mark Zuckerberg may not be the villain he’s often made out to be.

“I don’t think he necessarily neglects social interaction,” Jesse Eisenberg, who plays Zuckerberg, explained. “I just think he feels alienated by it … He feels kind of uncomfortable interacting in the way he sees everyone else interacting.” But then, that’s not Zuckerberg the person: it’s Zuckerberg the character in The Social Network. In order to play the world’s youngest billionaire, Eisenberg put himself into the mindset of Sorkin’s creation. But he also did his fair share of research on the real Zuckerberg — not to imitate him, but to get a better handle on who he is.

“I read everything I could find about Mark,” Eisenberg said. “I took fencing lessons, because he’s a fencer. I had every video of him converted to mp3, so I could have him on my iPod. This was all to help me focus.”

It also helped that Eisenberg could relate to Zuckerberg, a notoriously awkward public speaker: there’s video of the Facebook founder stammering, sweating bullets, generally not making a great case for himself. For Eisenberg, a character’s neuroses are what make him worth playing.

“I assume that everybody is neurotic in some way, or everybody interesting is neurotic,” he reflected. “It seems to me, why would you want to play anyone else? What other layers would there be besides neuroses?”

In writing his version of the real-life person, Sorkin grew to care about Zuckerberg. The end result is a character who isn’t always pleasant or charming, but who does inspire sympathy. In a way, that’s how Sorkin feels about his non-fictional counterpart.

“[Zuckerberg] is awkward in public,” Sorkin said. “He knows it, because he’s been told it so many times. He doesn’t care that much about money, so I don’t think that his billions of dollars are making things that much easier for him. So I actually feel affection and respect and empathy for him.”

The Mark-Eduardo bromance
The Social Network may be about the founding of Facebook, but at its heart, it’s also the story of a friendship betrayed. As in real life, Mark Zuckerberg turns his back on his best friend and co-founder Eduardo Saverin (Andrew Garfield).

“Obviously, there’s a massive betrayal, and within that betrayal [Eduardo] loses his innocence and realizes that you never know someone,” Garfield said. “You never fully know someone. The only person you’ll ever know is yourself and even then, you won’t really know yourself.”

There’s no hint that Zuckerberg and Saverin were ever more than friends — though that would make for an interesting movie, too. At the same time, Garfield likened the betrayal his character experiences to a break-up. During the interview, he reflected on a time he’d been dumped out of the blue — and the pain that followed. “You know that confusion you have when you’re broken up with, and you have no idea why?” he asked. “You haven’t been told clearly why, because that person’s protecting you.”

Garfield was reluctant to identify his character as “too trusting,” because he views trust as a positive quality. But Eduardo does have an honor system and moral code that make Mark’s betrayal all the more hurtful. “To me, it wasn’t about the money,” Garfield said, referring to Saverin’s $600 million lawsuit against Zuckerberg. “It was about teaching Mark a lesson.”

In fact, the desired outcome Garfield imagines his character wanted is a bromantic ideal. If Mark were to realize the error of ways, perhaps he’d apologize to Eduardo, and they could repair their friendship. It might not make for a gripping ending to the film, but it would be a happier conclusion for Saverin. “I think with Mark, up until the end, [Eduardo]’s hoping at some point Mark’s going to go, ‘Look, I’m really, really sorry, man. I really messed up. I love you so much, and I just was jealous of you for this. And I acted out like this. Can we be friends again? I’ll give you back as much money as you want. Let’s move in together and we’ll play basketball every day, and we’ll cuddle at night and watch reality TV.’ Part of Eduardo in those depositions is just waiting for that moment.”

Taking sides
It was important for Sorkin that his script not take a side. Instead, it presents the story of Facebook’s founding from three different perspectives: those of Zuckerberg, Saverin, and the also-involved-at-square-one Winklevoss twins. Meanwhile, director David Fincher made sure that all the actors believed their characters: they all tell what they believe to be the truth. “Every time we did a scene, even if it was part of Eduardo’s telling of the story, David Fincher would come up to me between each take and say, ‘You know you’re right in this scene. You’re the right one,’” Eisenberg reflected. “And then he’d go up to Andrew Garfield, and say, ‘You’re right in this scene.’ So we all thought we were right.”

Playing twins Cameron and Tyler Winklevoss (with help from body double Josh Pence), Armie Hammer had to maintain sympathy for both and project that to the audience. “With these twins, when you look at them on paper, they’re tall, athletic, good-looking guys who go to Harvard,” he noted. “They have a lot of things going for them that would make a lot of people in the audience go, ‘I don’t like these guys. They suck.’”

But Hammer planted himself firmly in their mindset. As is the case with Saverin, the Winklevosses aren’t necessarily interested in the money they’d receive from their lawsuit against Zuckerberg — it’s really about principle. These are characters of honor, and they were wronged. No matter how wealthy or dashing they are, Hammer insisted to himself that they deserved justice. “When we shot this, I had to side completely with them, just to bring truth to it,” he explained. “I had to say, yes, these guys did invent Facebook, and yes, Mark Zuckerberg stole it from them.”

Sorkin’s script is purposely ambiguous. While he was researching the story behind Facebook’s founding — along with The Accidental Billionaires author Mezrich  — he discovered conflicting versions of the truth. His solution? Show it all, and let the audience decide for themselves.

In Hammer’s mind, the authorial choice to leave it up in the air creates more of a challenge for the audience. “You are responsible for siding with the people that you recognize the most, or recognize yourself in the most,” he said.

Sorkinspeak
Those familiar with Sorkin’s work (The West Wing, Sports Night) know that his dialogue has a distinct sound. He considers himself a playwright, which might explain the fast-paced back-and-forth that dominates his scripts. The Social Network had a Sorkin sound that Eisenberg immediately clung to.

“When I had the audition for the movie, I made a little tape to send to them in Los Angeles,” he recalled. “They said, ‘This scene is ten pages but please try to do it in five.’ ‘Cause I guess what they were getting were these kind of indulgent moments that people are used to doing in movies, whereas it was immediately evident to me how it should be read.”

All the actors I interviewed gushed over Sorkin’s novel-length script. For Garfield, it was essential to treat the script as the Bible — though that’s not the case for every film. He worked hard to get into character as Eduardo, adopting characteristics that were foreign to him. That it was a matter of letting the script work its magic. “The rhythm of Sorkinian language — you just don’t get in the way of it,” he noted. “An actor wants to put his own mark on something, but that’s your ego and you don’t need that. So you just try to not get in the way of these beautiful sequences of thoughts that have been expressed so deftly and seeped with subtext.”

Sorkin wasn’t quite so effusive about his own work, but he was willing to talk about his process. As he said, creating a fictional version of Mark Zuckerberg helped Sorkin find affection for the real person. But even before that, he knew it was important not to make him too black-and-white.

“When you’re writing an antihero, what I try to do with a character like that, is write it as if they are making their case to God why they should be allowed into heaven,” Sorkin said. He made the comparison to Jack Nicholson’s iconic “you can’t handle the truth!” speech from the Sorkin-penned A Few Good Men (1992).

“You can’t have them twirl their mustache,” he continued. “You can’t think they’re a bad guy — you just have to put obstacles in front of them.”

As for the rhythm of the dialogue — “Sorkinian language,” as Garfield calls it, or “Sorkinspeak” — the writer admits a heavy theatrical influence. He said it began at a young age when his parents took him to plays that were above his age level, like Who’s Afraid of Virginia Woolf? “I wouldn’t understand the story that was going on, but I loved the sound of the dialogue,” Sorkin remembered. “It sounded like music to me, and I really wanted to imitate that sound — just words crashing into each other, and speeches. It follows the same patterns as the movements of a symphony.”

In replicating that sound, Sorkin’s script carried the actors where they needed to go. “It’s all there in the script,” Garfield said. “All you have to do is be truthful in that situation and allow the thoughts to turn into words, and the words to turn into an action.”

The Facebook
The Social Network has been widely referred to as “the Facebook movie,” but its cast and crew insist that such a designation is misleading. “Sports Night wasn’t about sports,” Sorkin said. “[The Social Network] isn’t about people friending and poking people and falling in love on the internet. Maybe I just give things the wrong title.”

We did speak about Facebook extensively during our interviews. How could we not? With 500 million users, the site has become a part of daily life. It’s hard to know how we functioned before it. Even Eisenberg, who is not on Facebook himself, understands the sentiment. “In the movie, [Mark] kind of sees this void online,” he noted. “We look at Facebook now in retrospect, like, ‘How could this not have existed?’ That’s how Mark viewed it.”

Sorkin isn’t on Facebook either, though he and Eisenberg both set up accounts while they were filming. While he acknowledged that part of his hesitation comes from a generational divide, Sorkin was upfront about his negative perception of the site. And no, it has nothing to do with Zuckerberg himself. “For a device that’s supposed to make us better connected and bring us closer together, I feel like it’s doing the opposite,” Sorkin opined. “I feel like social networking is to socializing what reality TV is to reality. In a way we’re performing for each other.”

Hammer shared a similar point of view. He mentioned negative experiences on Facebook in the past, though he was smart enough not to elaborate. “The dark side of Facebook is it turns these people into voyeurs,” he said. “And if not voyeurs, then even worse, it turns them into narcissists, where they think that they’ve put themselves on the cover of their own Rolling Stone.”

Or even worse than that: compulsive pokers.

The Social Network opens in Fri/1 in Bay Area theaters.