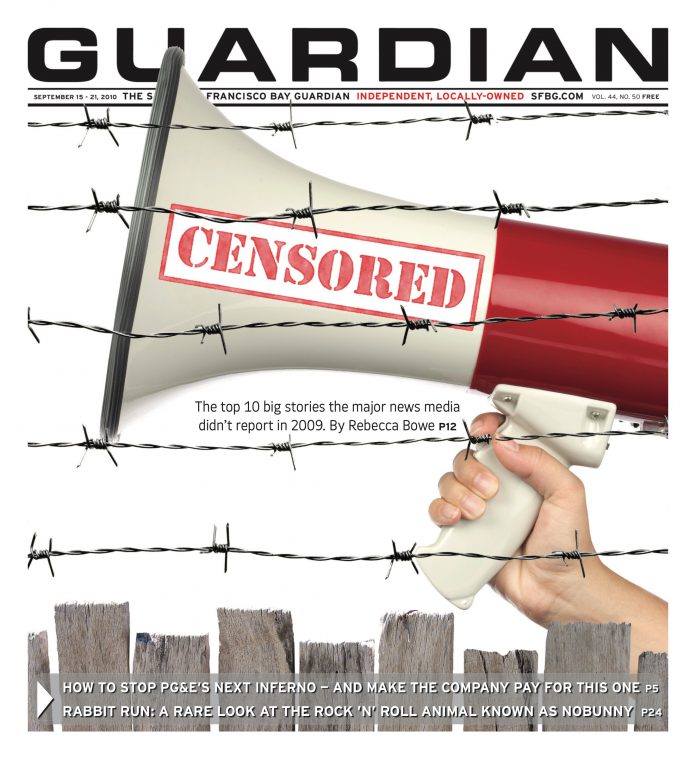 
STAGE The sexes — more or less all of them — were at the heart of much of my first 48 hours at the San Francisco Fringe Festival, Exit Theatre’s 19th annual uncurated gamut-gamble. There, too, were the power trips, the pity fests, the nonsense, the reverence, and the dark-carnival mayhem that trails in all of its wake. Men solo, women on women, persons of uncertain gender in ensemble dances, L.A. cabbies driving down mammary lane, men in lab coats burning women at the stake — all of them were sources of grim or delirious laughter, vividly etched characters, a legit existential truth or two, and the occasional horrible theatrical misstep. Just what we go to the Tenderloin for.


In VITCH Slapped, Starr Ahrens, Nancy Kissam, and Diana Yanez of Los Angeles–based troupe The Gay Mafia lob a volley of comic sketches on the subject of, for want of a better term, women’s issues. It’s about harmony (of voices, of visions, of menstrual cycles) and breakdown (of patriarchy, sexual orientation, nervous and social conditions). Hence songs to the goddess-moon-mother from three loving sisters in paganism — or two loving "life partners" and one disgruntled ex–life partner. Hence a jack-booted lesbian speaking impeccable German with an audible whip-crack to each (surprisingly) meaningful morsel. Hence a vlog by two determined liberators of the female bod on a nude road trip across America, always one step ahead of propriety and in stride with the best of bad taste. This and more, in a show that makes up for only fitfully inspired material with focused performances and contagious exuberance.


In the same venue — namely, the Exit’s brand new, nicely appointed Studio Theater — man gets his retort in L.A.-based writer-performer James Schneider’s Man on Sex. But this solo outing is not up to the task. The promise in its title of frank truth-telling from a male perspective leads instead to a disappointing meander down a rather passive-aggressive lane, taken by a man frustrated that his wife has stopped having sex with him. Shallowly assuming the air of an innocent victim of some unnatural disaster, Schneider presents a monologue that lacks honesty as well as cohesiveness. It’s punched up (if not quite elevated) by a pseudo-Elizabethan rap called the "PeniFesto" and about half-dozen original songs that the actor sings to his own keyboard accompaniment. These range from the maudlin ("If Only I Liked Strippers") to the boorishly jaunty ("Tranny in a Tree"). The music conveys some dexterity and imagination, but the schmaltzy pop style, like the show’s overarching theme, often feels strained and misplaced.


Meanwhile, just down the hall in the Exit’s cozy Stage Left, The Burnings smacks its female subjects and the audience around. Writer-director Lili Weckler’s macabre poetry spins a sinuous narrative about three exploited laborers (Rebecca Kanengiser, Carla Pauli, and Lauren Spencer, all wild-eyed and draped in sack cloth mended with duct tape). Their stories are coaxed from them on pain of death, then capitalized on by an opportunist doctor (Pete Frontiera), aided by his willful henchman, The Interpreter. There’s energy and attitude right out of the box, but the play takes a while to heat up and never quite scorches, despite committed performances and lively staging. Beginning like something staged in a neighbor’s haunted house, The Burnings gains depth in its mixing of medieval misogyny with the more subtly sadistic, flagrantly commercial gestures of the therapeutic age. The music along the way — each actor plucks or strikes or squeezes sound from some little something — is sparely composed but well done. This is especially true of the resonant vocal harmonies.


Accomplished actor Dominic Hoffman’s solo show Last Fare will likely rank among the best within the 12-day festival. Beginning at the funeral of a Hollywood man who was mysteriously murdered, the story follows a noir-like path through interviews with several people acquainted to one degree or another with the victim. Hoffman imbues the half-dozen or so characters in his beautifully written play with palpable life — life slightly larger-than, in fact, in keeping with one cab driver’s observation that in Hollywood everyone thinks he or she is a movie star. Suffused with alternately wry and raucous humor, affecting but understated emotion, and flashes of genuine insight and wisdom, Last Fare lures us to the fateful site of apartment 609, only to meet us with surfaces so crystalline in their appearance, and solid in their depth, that they become as much mirror as doorway.


One show not seen in time for review but worth flagging for consideration is San Francisco–based writer-actor David Jacobson’s Theme Park. A hysterically funny and sharp excerpt at the San Francisco Theater Festival had phrases like "powerhouse," "Best of Fringe," and "creatively disturbed" written all over it. Also promising is The Burroughs and Kookie Show: Late Night in the Interzone. The title alone appeals, but knowing this RIPE Theater coproduction is the brainchild of writer-performer Christopher Kuckenbaker (whose recent performance credits include Beowulf: A Thousand Years of Baggage) seals the deal.