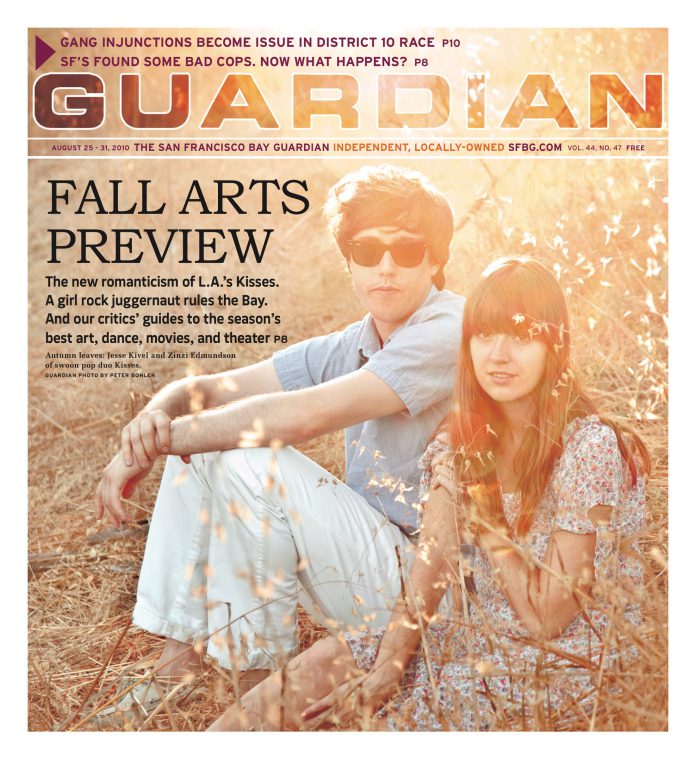 FALL ARTS La-dee-dah, ’tis autumn, and to hold your loved ones close really is no crime — just ask the birds and the trees and old Father Time. So an old song goes, one that applies to some lovely new songs by Kisses. Musical and romantic partners Jesse Kivel and Zinzi Edmundson have crafted what might be my favorite album of the year so far, Heart of the Nightlife, a ten-song collection that summons a strong sense of longing in a resort setting, thanks to Kivel’s handsome voice and way with a melody. Perhaps too fittingly, considering the album’s atmosphere, Heart of the Nightlife has yet to find a label to call home, but that hasn’t stopped the duo from moving forward with a fall tour, including a November stop in San Francisco. I recently caught up with Kivel on the phone.

SFBG Travel and a sense of place and of displacement sort of dance with one another throughout Heart of the Nightlife. Can you tell me a bit about that, both in terms of personal experience and inspiration?

JK A year and a half ago I quit my day job and was trying to find ways to make money. I found an ad on Craigslist about writing for a travel site. It focused on vacation spots and timeshares. I thought it might be a scam, but then I started getting paid. They didn’t care about me going anywhere — it wasn’t mandatory for me to go to a hotel before recommending it. In terms of journalistic integrity it was pretty low, but it was a funny way of making money. Kisses was already happening. The song “Weekend in Brooklyn” was the first song I recorded. I’d been listening to a lot of Arthur Russell.

SFBG To me Kisses brings a sort of new new romanticism or Postcard (as in the record label) romance. In the ’80s, new romanticism was a pop phenom. There are waves of groups with ’80s qualities at the moment, but Kisses is the only one that seems to distill or refine them into something potent and distinct.

JK My favorite artists have always toed the line in terms of sentimentality, where the lyrics might be heart-on-your-sleeve or sentimental, but it works. Instead of writing lyrics about vague, cool, things — with so many bands now, you can’t even hear the lyrics.

That’s why I get so mad about being lumped in with chillwave. No one knows how to write songs, but there’s an aesthetic to it that can be easily imitated and people take advantage of that. They can’t sing, but the vocals are covered in reverb. I like a cool vibe, but at the end of the day there’s nothing unique about it. Being a part of a scene like that is degrading to me in terms of songwriting and work put into music.

SFBG The beat of “People Can Do the Most Amazing Things,” puts me in mind of Arthur Russell’s “Platform on the Ocean.” I also feel like there a kinship between the tender and human quality of Russell’s lyrics and yours.

JK It’s unbelievable how few people have even recognized that. Everybody is so engrossed with what is happening this second. There are bands I don’t mind being lumped in with — the Balearic and Swedish bands, the people on Sincerely Yours. But that isn’t chillwave. Culturally, those groups pull off a lot of lyrics because of their unique relationship to the English language. They phrase things in a more poetic way but its incidental.

SFBG How and when did you come up with the line “I would like to take you out for a nice steak dinner” [from “Midnight Lover”]?

JK Have you ever seen Catch Me If You Can? That line is in the movie, and Leonardo DiCaprio says it in this weird accent to a girl, and she loves it. There’s something archaic and formal about it. There are so many things you’re assuming with that line. You’re assuming that a girl would eat red meat. That’s a bold move in this day and age. I liked the image I got from that lyric.

SFBG The other line I have to bring up is “I thought all my friends were over me,” from “Bermuda.” I love how it mixes solitude and closeness.

JK That’s one of the most honest lyrics on the record. I’ve seen this happen with me, and with Zinzi and her friends. You can be wrapped up in your life and have this insecurity about your friends being over you. After school, you are restricted by space and time from hanging out with the people you grew up with, and you wonder whether you’re still important.

SFBG Disco producers such as Alec Costanidos and Gino Soccio are mentioned in relation to Kisses. How does Constanidos figure in your music?

JK I’ve known Alec my entire life. My mom’s best friend is married to Alec, and I remember going to his studio when I was little and dancing around to MC Hammer. I never cared about what he made — in the ’90s, disco was something cheesy and irrelevant.

I revisited Alec after listening to more contemporary artists revive disco in a way that I thought was exciting — people like Lindstrom and Glass Candy and Chromatics. I was trying to figure out my voice in dance music. Songs like Cerrone’s “Supernature” and “Love in C Minor,” which Alec wrote with him, really inspired the style and feeling of Kisses. There are pop elements to them — even though they’re long-playing, with tons of repetition, they have great hooks.