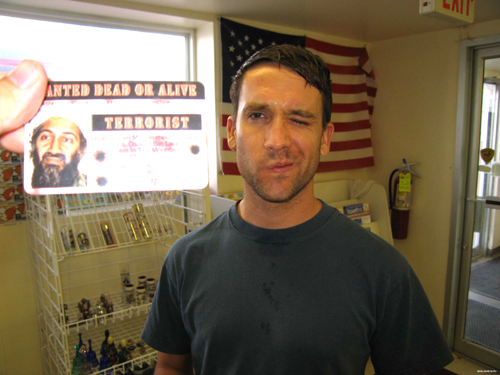 On Friday 8/13, Berkeley Art Museum is hosting a project that is threefold: the visual art of David Wilson, short films curated by Max Goldberg, and the music of Jamie Stewart (Xiu Xiu). To find out more about this unusual collaboration, I spoke to Mr. Stewart on the phone about his contribution and how he anticipates the night will go down.

SFBG The BAM website says that you’re debuting a “new composition in field recording inspired by the night, animal calls, and quietness.” This is a little vague, so could you tell me more about what your performance is going to be?
Jamie Stewart I’ve always been really impressed with people who went to art school but I’ve never had any opportunity. Probably in the past six or seven years I’ve become a really avid birdwatcher and one of the things that I initially, having been so involved in music, enjoyed about birdwatching is that it was something completely visual for me. Most bird calls are completely bizarre so I had since become almost focused on listening to bird calls but almost in a way that’s detached from the birds itself. In the middle of this increased interest I find myself inexplicably in North Carolina and a big part of the recreational culture here is hunting. There’s a lot of hunting stores and being a vegan obviously, I’m not totally interested in hunting. In these stores there were rows and rows of different animal calls and a lot of these are really horrifying-sounding. If you blow into them, you hear some of the most harsh noise music ever imaginable. A lot of the hunting bird calls sound like the environment completely exploding. So I’ve racked up a pretty hardy collection of these.

SFBG How might you categorize this work into a genre?
JS It’s an ambient piece. I have a really extensive collection of gongs and animal calls and I will be using these together but with long periods of silence. It’s an attempt to incorporate ideas of 1950s minimalist composition insofar as focusing on the pauses in sound, animal sounds, and a certain amount of physicality.

SFBG How are you going to do it?
JS I think I’ll be running mostly. It will end up utilizing a fair amount of space. So far, there will be gongs placed on two different sides of the room and I have these two gongs I got in Korea recently, and various bird calls will be placed throughout the room. Part of the idea is to have [the piece] be in relative darkness and move as quickly as possible at predetermined intervals with each of the items that can make sound, to have a combination of intense rustling and physicality, and intense sounds, in addition to certain electronica. Short periods of super intense activity and miserable, intense sound, and then no source of sound.

SFBG How is this similar or different to Xiu Xiu?
JS It has absolutely nothing to do with Xiu Xiu at all. That has a specific aesthetic and philosophy, whereas this is more about being less defined, about subconscious experiences, and to be more experiential, whereas Xiu Xiu is an attempt to be about something that is very linear. I can feel what it is about but it is difficult to say what it is about. I think it will be emotionally clear but I think to put it into words will be more difficult, which is something I appreciate because usually I have to be as clear as possible.

SFBG Is this your first venture into museums and visual art?
JS When I was growing up, I used to do a lot of disruptive performance art –– we would shave our armpits into orange juice, the dumbest things possible. It wasnt a performance, I think we were just trying to irritate people. I’ve played the Gameboy occasionally. I’ve composed a fair amount of ambient music. I recorded a 13-disc series [available with a subscription]. I didn’t put it online, so I guess it was available to 50 people on Earth. This piece is probably more minimalist than some of that.

SFBG Who are some ambient artists that have inspired you in the making of this work?
JS A couple (like Rhys Chatham) but it was really inspired by natural sounds and more of a coming to terms with different ways in how people regionally deal with ideas of nature. [Being from California] I have a hippie-ized idea of what nature is for. Rhys Chatham is so preposterously minimalist. Chestnut and I saw how long we could endure listening to it. It’s called “Two Gongs” but my piece plays differently. Two gongs for an hour, very limited changes in the tonal shading. A lot of ambient music that I find difficult to endure or that is unpleasant I find particularly fascinating. It ends up being less of a musical experience and more of a psychological and physical experience. Its a combination of being inspired by the sonic tools that people use to destroy nature. Hopefully it’s just interesting. I don’t think Rhys Chatham was trying to do anything unpleasant either.