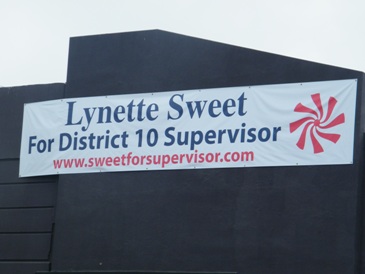 The DCCC makes its endorsements for the November election on August 11. And in preparation for that crucial endorsement, candidates filled out questionnaires that are posted online, providing fodder for those interested in Jeff Adachi’s pension reform, Mayor Gavin Newsom’s sit-lie ordinance, and the legalization of marijuana, amongst other measures.

But before we get to those issues, I have to admit I was a bit surprised to see that D. 10 candidate Malia Cohen, who has already secured the endorsements of Sally Lieber, Fiona Ma and Aaron Peskin, says on her DCCC questionnaire that she supports the death penalty.

Now, to be fair, advocating for or against the death penalty isn’t the duty of the Board of Supervisors. And I haven’t yet caught up with Cohen yet to clarify why she holds this stance, (or whether it was one big typo, though I somehow doubt it). So, I’ll be sure to update this post, once I have a chance to talk to Cohen, who was busy at yet another candidate forum, when I was writing this entry. UPDATE: Cohen says she does not support the death penalty, and that she inadvertently misanswered the question. (Thanks for clearing up the mystery, Malia, and being gracious about it in the process.)

And I should also note that while D. 10 candidate Lynette Sweet’s questionnaire says she supports Jeff Adachi’s pension and healthcare reform, Sweet’s campaign says that’s not the case, pointing to how Sweet said at the Potrero Hill Democratic Club’s August 2 D. 10 forum that what Adachi did wasn’t a bad thing, but the way he went about it was.

I quoted Sweet saying those very words in a previous post, and Sweet’s campaign manager Shane Mayer told me that he forwarded what I wrote about that meeting to the DCCC to clarify Sweet’s position. But Mayer got testy when I asked him about the rent, or rather the lack of rent, that Sweet, who Mayor Gavin Newsom has already endorsed, appears to be paying for her campaign headquarters at 25 Division Street (at Rhode Island).

As Beyond Chron tells it, the deal looks more than a bit fishy, and appears to be bankrolled by the Visovichs, a family with Republican leanings that supported Mayors Willie Brown and Newsom in past election campaigns.

Mayer tried to dismiss the Beyond Chron article as a “hit piece”.

“The article focuses on only one candidate,” Mayer said. “We’re paying fair market rate, and using only a small portion of a warehouse. When we moved in, we didn’t have lights.”

While on the phone with Moss recently, I asked what he thought about Newsom’s sit-lie ordinance, Moss said he hadn’t made up his mind yet.

And in his DCCC questionnaire, Moss also waxes ambiguous on sit-lie. “There’s clearly a lack of civility in certain areas of the city,” Moss wrote. “And in Bayview-Hunters Point, youth loitering can create conditions that create violence. However, it’s not clear to me that sit-lie is an appropriate response to this issue, and that it won’t result in unintended consequences. For example, sidewalks in Bayview-Hunters Point are also often used for peaceful gathering of neighbors, which is community-building and non-threatening.”

UPDATE: I should add here that termed-out D.6 Sup. Chris Daly has just endorsed legislative aide and D.6 candidate James Keys, whose DCCC answers I’ve included in my round up of some of the candidate responses to this year’s DCCC questionnaire. UPDATE: And for all the Glen “Anna Conda” Hyde supporters, my humble apologies for omitting your candidate’s positions in my first post on this issue:

No position, yet: Alioto-Pier, Janet Reilly.

“I philosophically support this measure but am concerned that its economic and social implications haven’t been carefully considered, nor its interaction with federal law,” Moss wrote on his DCCC questionnaire.

Sparks for her part just clarified that she mistakenly answered “No” on two DCCC questionnaire items: “Do you opposeprivatization of essential government services,” and “Will you oppose anti-worker initiatives that seek to undermine the ability of union leaders to carry out will of members and engage in political activities.”

“I meant to answer yes, as I explained at my DCCC interview,” Sparks said. “I was confused by the double negatives.”

While she was on the phone, Sparks also admitted that the pace on the campaign trail is getting intense with forums and meetings every night.

“David Campos, who has been a good friend since we were both on the Police Commission, recently told me, ‘win or lose, you need to schedule a few weeks off in November when the election is over,’” Sparks said.

Campos is right. To all the candidates on the campaign trial, here’s wishing you lots of energy and calm in the weeks to come. And see you at the DCCC forum.