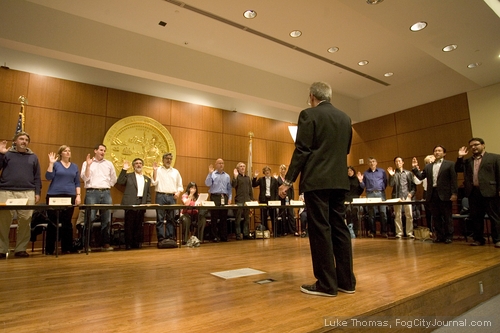 When the San Francisco Democratic County Central Committee convenes tomorrow (Aug. 11) evening to vote on its endorsements for the November races and ballot measures, the clout and unity of its slim progressive majority will be tested in a few high profile contests where the outcome isn’t entirely clear.

As I reported last week, progressives occupy only about 17 of the 33 seats, so any defectors from the slate that won in June could create some squirrely politics or backroom deals. Progressive supervisorial candidates Rafael Mandelman from District 8 and Debra Walker from District 6 are widely expected to get the top endorsements in their races, but Rebecca Prozan in D8 and Jane Kim (and possibly Jim Meko) in D6 each have some progressive supporters on the committee and could make a play for the second slot in the ranked-choice voting election. D8 candidate Scott Wiener, the former DCCC chair, will probably also try to get some kind of spot on the slate but is likely to be met with fairly unified progressive opposition.

The District 10 endorsement will be a free-for-all with no clear progressive consensus alternative to downtown-backed candidate Lynette Sweet yet emerging from the crowded field. Party chair Aaron Peskin has endorsed Malia Cohen and Tony Kelly in that race, but Chris Jackson, Dewitt Lacy, Kristine Enea, and other candidates also have progressive backing, so it could be tough for any of them to get to 17 votes at this point. But in District 2, Janet Reilly appears to have the endorsement locked down, despite a judge allowing incumbent Sup. Michela Alioto-Pier to run for a third term.

On the local ballot measures, the progressive majority is likely to endorse the revenue measures (a hotel tax increase pushed by labor, a transfer tax on properties worth over $5 million, and a small local vehicle license fee surcharge) and reject Public Defender Jeff Adachi’s measure to increase how much city employees pay for health care and into their pensions and Sup. Sean Elsbernd’s measure to end pay guarantees for Muni drivers (although not even progressives are feeling much love for the recalcitrant Transportation Workers Union these days).

The aggressive effort by the legal community to overturn the DCCC endorsement of Michael Nava for judge – waged on behalf of Judge Richard Ulmer, a recent appointee of Gov. Arnold Schwarzenegger, ostensibly over judicial independence but also as a way of sucking up to judges that lawyers want to curry favor with – is expected to fail, mostly because it requires a two-thirds vote. An ordinance to ban sitting or lying on sidewalks that is being pushed by Mayor Gavin Newsom, Police Chief George Gascon, and San Francisco Chronicle columnist CW Nevius is also likely to be soundly rejected by the party.

DCCC endorsements usually carry quite a bit of weight in heavily Democratic San Francisco, getting the candidates on party slate cards and entitling them to other party resources. Any races that don’t yield a majority endorsement this week would get pushed back to the September meeting, when the DCCC will consider school board endorsements.

The fun starts at 6 p.m. at the Unite-Here Local 2 office at 209 Golden Gate Avenue.