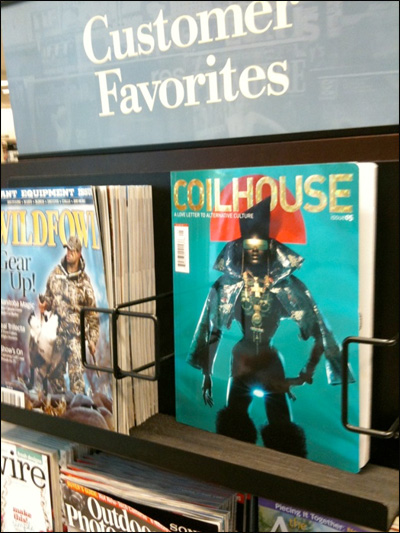 Founded by three brilliant renaissance women with roots in L.A. and the Bay, the alt-everything institution known as Coilhouse exists both as a fantastic groupblog and a quasi-quarterly magazine. According to the mission statement on their website, “Coilhouse is a love letter to alternative culture, written in an era when alternative culture no longer exists.” They cover everything from fashion to visual art to film to comics, with a wealth of youtube clips and beautiful images in all their posts. These ladies — Zoetica Ebb, Meredith Yayanos, and Nadya Lev — and their various collaborators are down with Klaus Nomi and at home with esoteric Russian literature, and more than happy to share with you what made them weird.

The print incarnation of Coilhouse is on its fifth issue, released just under a month ago and already sold out online, but still available at a variety of real-world retailers. Each incarnation of the magazine has brought new experiments in design, ranging from the subtle and inspired (eerie silver foil accents on the cover of Issue 4) to the endearingly goofy (candy-colored section frontispieces in the latest issue). This issue incorporates bonus items — a pull-out poster of Chet Zar art and two trading cards featuring images from the magazine’s Dorian Gray photoshoot. The pages of the issue itself are frantically crowded with original art, photography, and outrageous pull-quotes, but in a way that ultimately suggests raw, genuine enthusiasm.

The content of the magazine is divided between interviews, photo spreads, and primer-style features. Oh, and paper dolls. The new issue features interviews with geek luminaries like horror writer Clive Barker and power-couple Neil Gaiman and Amanda Palmer. Former- Star-Trek -teen-turned-celebrity-blogger Wil Wheaton contributes a non-fiction piece excerpted from his recent book The Happiest Days of Our Lives, and Jess Nevins chronicles the history and highlights of Chinese pulp fiction as a formidable counterpart to the western version. Zoetica Ebb compiles attitudes on “shoe lust,” and Angeliska Polacheck provides a photo-heavy history of the dance part Gadjo Disko

Photography in the issue includes a tribute to the late fashion designer Tiffa Novoa as well as the aforementioned Dorian Gray concept series of photos. The images range from glamorous to grotesque, with an attractive post-goth pall over the whole affair.

Special-interest magazines have taken a huge hit in the past several years, as the Internet has expanded to cater to any and every niche curiosity, so one of the few ways to grab a wide community of readers (for a blog as well as a magazine) is to express a weird, specific aesthetic that crosses subcultural lines. The fact that Coilhouse is essentially a blog that congeals into a magazine a handful of times each year makes it squarely a product of Internet culture. Perhaps that accounts for why it’s so mad and overwhelming, but it also accounts for why it feels so fresh and energetic, and so engaged in the benefits of the magazine as a form of communication distinct from blogging.