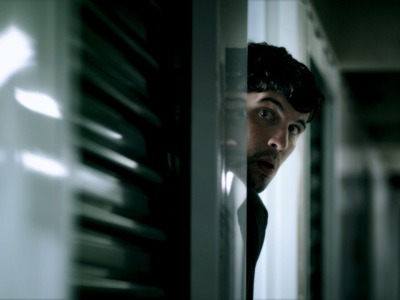 By now we’re past the halfway point of 2010, the inaugural year of another decade in movies. So far, the selection of great films has been scant –– though, as usual, the coming of winter and the iron hand of film’s favorite fascist Harvey Weinstein signal Oscar-worthy films in our future. These are the best films of 2010, so far, in alphabetical order. And yes, I have seen Inception, but I did miss The Ghost Writer. Cold Weather (Aaron Katz)
http://www.youtube.com/watch?v=zEggB8DvXP4
Aaron Katz acts as the much-needed liaison between mumblecore and non-mumblecore (what would that be? Everything Else? Screamcore?), forgoing an already tired genre (though Andrew Bujalski’s Funny Ha Ha remains great) for a totally weird existential detective story. Cold Weather stirs up the naturalism of mumblecore with the more exciting draw of, say, an independent thriller.

Exit Through the Gift Shop (Banksy)
http://www.youtube.com/watch?v=GTlm6dU2xHk
The exit of this Gift Shop could’ve led us down an enigmatic path forged by Banksy for his own self-gratification. Yet, for the most part, he turns the camera completely away from himself –– despite a few shadowy moments –– and onto Thierry Guetta, also known as Mr. Brainwash, also known as the biggest art hack of the 21st century.

Joan Rivers: A Piece of Work (Ricki Stern, Anne Sundberg)
http://www.youtube.com/watch?v=2fnojZw54ls
One of the best documentaries about show business ever, A Piece of Work is just that and more. It is the root canal of a starlet going sour, a woman trying to elevate herself above flotsam-status. Joan Rivers has never been so heartbreaking before, nor has she been this saucy.

The Kids Are All Right (Lisa Cholodenko)
http://www.youtube.com/watch?v=DgwjTy_cohg
This is the best tragicomedy about family in America that I’ve seen in awhile. Annette Bening and Julianne Moore note-perfectly elicit all the nuances of a very long marriage. Cholodenko works in a language that can be universally understood and in some way, I can’t help but think she’s made a great case for gay marriage.

Please Give (Nicole Holofcener)
http://www.youtube.com/watch?v=zi9WlsYCr-k
In Nicole Holofcener’s (Lovely and Amazing) sometimes icky dramadey, Catherine Keener is brilliant as a polarizing character who tries to have a heart of gold –– but all her liberal trappings are weighing her down. Rebecca Hall plays a woman who is sort of the opposite: a genuinely good person for whom things just don’t work out. These are some of the year’s best performances.

Shutter Island (Martin Scorsese)
http://www.youtube.com/watch?v=HYVrHkYoY80
A totally misunderstood, underrated genre romp, Shutter Island is Scorsese’s Shining: occasionally terrifying, oozing with hallucinatory visuals and an ending that could be potentially be seen as a cop-out. Leonardo DiCaprio, in all his tortured, splashing-water-on-his-face-in-front-of-the-mirror madness, has utterly convinced me he’s one of today’s great actors.

Splice (Vincenzo Natali)
http://www.youtube.com/watch?v=t6o_Vl2f07Q
Splice is probably the most fun I’ve had at the movies this year. It’s fucking scary, it reeks of Freud, and Adrien Brody looks brutally hot –– again. But seriously, guys, if you consider yourself a horror or sci-fi buff at all, you’ll most likely take great pleasure and comfort in this film, and the fact that Vincenzo Natali restored my faith in horror. The most remarkable splicing is the one with thrills and laughs. This movie is mostly horrifying for its 104-minute running time, and hilarious for at least 80 of those minutes.

White Material (Claire Denis)
http://www.youtube.com/watch?v=z2noQowyoKQ
I don’t really know what the hell happened in this movie –– most of the senior citizens seeing it at the PFA didn’t know, either –– but all I need are lots of grainy handheld close-ups of Isabelle Huppert’s face to know White Material is good.

Winter’s Bone (Debra Granik)
http://www.youtube.com/watch?v=HQ8kqytI_oA
Granik wow’d me with 2004’s Down to the Bone, and she’s thrown us yet another bone with Winter’s Bone, a bloody and downright biblical tale of the Ozarks. Granik is so skilled because she deals in rich, beautiful symbolism that’s never too obvious, nor is it cockeyed. She might very well be the Dardenne Brothers of the West.

HONORABLE MENTION: I almost forgot Sex and the City 2 (Michael Patrick King). It transcends this list. It is the list-defier of all list-defiers. It’s just that good. So good, in fact, that I just can’t parse it with words.