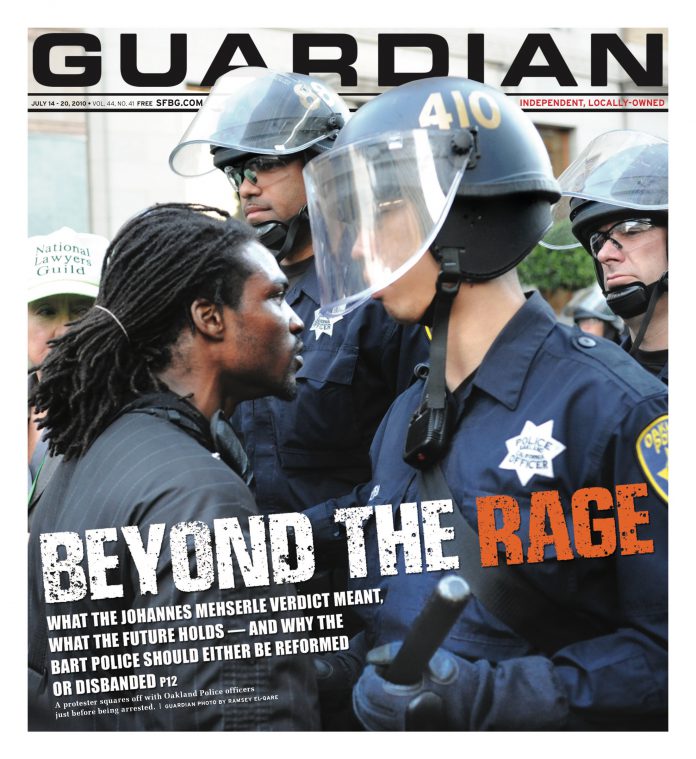 
After that my memory was erased — there’s a slight chance by space aliens. But it’s also possible that the crawfish were that spicy. That’s why I wanted to find the place. And will, another time.


This time I got distracted. Three lanes of oncoming traffic when you’re riding a bicycle the wrong way down a one-way street, such as Gough Street, will do that to you. I wish that didn’t seem like a metaphor for my life, but it does.


Because I do, ultimately, want to continue living it, I zipped over to the sidewalk and there was a bike rack. I started to lock up without even looking around first. I was on the other side of Market Street. Nothing else mattered.


Then, yes, I looked around.


With every intention of still going in search of crawfish afterward, I ducked into a place called Go Getters Deli, only the "o" was a green olive with a pimento in it. Plain block letters on the window advertised burgers and burritos, but that wasn’t why I chose the place.


I chose it because all six or seven of the people inside were sitting on the same side of their tables, facing the same direction, and looking upward. So I took that to mean there was a TV, with a soccer game on it.


But I couldn’t decide which idea I liked better: eating a burrito in a burger joint, or a burger in a taqueria. Since it was already almost half-time, I wouldn’t be able to do both. So, being predictable, I went with Plan C. Which, in this case, was a chicken sandwich with "flaming sauce," red onions, and tomatoes.


Flaming sauce = chipotle, and the sandwich was damn good. The bread tasted homemade, which seemed strange, unless they are in cahoots with Go Getters Pizza across the street and down a block. And, come to think of it, why wouldn’t they be? With a name like Go Getters Deli.


Well, the chipotle sauce wasn’t exactly "flaming." But that’s why I keep a bottle of hot sauce in my purse. With which … yum, yes, hot hot hot. And a lime Jarritos.


And an exciting half of World Cup soccer, and I forgot all about the crawfish place I had already forgotten about.


While the players were still hugging each other or else lying in the grass crying, taking off their shirts, and so on, I polished off my Jarritos, put on my sunglasses, smiled at my fellow sports fans, thanked the owners and kitchen and counter people (who had all come out to watch the end of the game), and walked into the doorjamb because I had my sunglasses on.


It was one of those days: on the edge between foggy and sunny. I buttoned up my jacket halfway, saddled my Schwinn, and huffed back to the Mission. Where some guy was doing jumping jacks on the sidewalk.


Normally I would have stopped and talked to such a someone, but he didn’t look quite crazy enough for me. He looked like a really fucking normal person, in fact, dressed in a regular way. Just happened to be doing jumping jacks on the sidewalk is all. Valencia Street. Facing a telephone pole.


And who am I to argue with that? I had a big scratch on my face. It looked like I’d been in a fight with a cat, or a catfight, but in fact (and as usual) the story was much less interesting. It starred a two-year-old, with a cracker. These things happen. Crackers are sharper than you think.


I mean, it was an accident.


I mean, physical fitness is important. *