Home Gore ... and bores: more Another Hole in the Head reviews 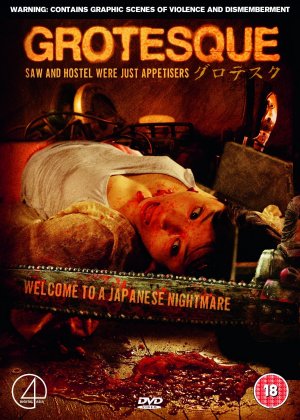 More bloodthirsty coverage of the San Francisco IndieFest’s horror-fest offshoot, Another Hole in the Head, in this week’s Guardian.

Grotesque (Koji Shiraishi, Japan, 2009) When did gorno stop being sick and start becoming sad? In Koji Shiraishi’s Gurotesuku, or Grotesque – banned in the UK – a chainsaw is brought to chests, arms, legs, and fingers when really it should be brought down on this celluloid garbage. Shiraishi presents a film that is sloppy, badly written, badly acted, and is above all things, deeply unentertaining. The plot is as thin and drawn-out as one of the protagonist’s intestines: While on a date, two dumbfucks get picked up by a craaaaaazy doctor (at least I think he’s a doctor – and I think he’s lost his board certification) who proceeds to do sick but unoriginal things to them (sawing off a girl’s fingers and stringing them on a necklace for her BF? C’MON!). There are some brief moments of respite, albeit painfully acted and ridiculous respite, but the torture tries not to let up its chokehold on the audience. Unfortunately, it just ends up being a chokehold on our time. Fri/16, 5 p.m. and Sun/18, 7 p.m., Roxie.

Ticked-Off Trannies With Knives (Israel Luna, USA, 2010) Trannies should get ticked-off more often. In a mock-exploitation fest like this one – which has the candid crudeness of a John Waters film – the tranny is the ultimate hero because she embodies the street smarts and agility of a woman, and the muscles and thirst for vengeance of a man. After an aggressive brush-up with some nasty bros (and what’s worse than a weapon-wielding homophobe?) the titular trannies in Ticked-Off set out to put the ol’ Hammurabi’s Code to the test – and with results both hilarious and flat-out gross. The cheeseball aesthetics and maudlin acting are surprisingly funny and self-conscious rather than self-effacing – yet in dealing with something like a hate crime, how else can you approach the material? July 22, 5 p.m., Roxie and July 23, 9 p.m., Viz.

Doctor S Battles the Sex Crazed Reefer Zombies (Bryan Ortiz, USA, 2008) Apparently, Reefer Madness (1936) and the public health warnings like it were right: weed does turn you into a monster. But in this underachieving student film, the message arrives a little too late. Doctor S has a promising start: some hilarious faux-film reel ads, and many a nod to cult horror films. In stark black-and-white, it’s as if Candace Hilligoss were running from stoners in Carnival of Souls (1962). But once the PhD of the title teams up with a cheerleader, saved from her post-puff zombified boyfriend at Make Out Hill, the film quickly devolves into amateurism. The thrills are cheap – too cheap – and the laughs are forced. Not to mention the title is way cooler than the movie itself. July 23, 7 p.m and July 26, 9 p.m., Viz.