Home Sibling rivalry with the stars of "The Last Airbender" 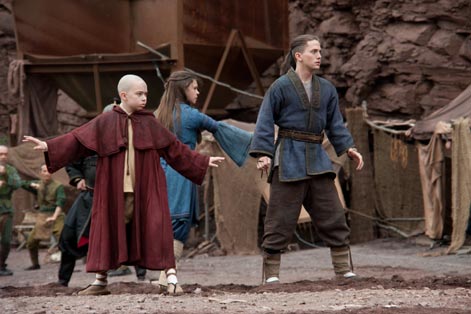 While Twihards know Jackson Rathbone from his portrayal of Jasper Hale in the first three Twilights films, Nicola Peltz is a relative newcomer. But both are sure to get a burst of fame with their starring roles in M. Night Shyamalan’s The Last Airbender, an epic live-action adaptation (out Fri/2) of the animated Nickelodeon series. Rathbone and Peltz play siblings Sokka and Katara, refugees of the water tribe who join forces with Aang (that’d be the last airbender) to save the world. In talking to the actors about their filming experiences, it’s clear they’ve got the sibling rivalry thing down pat: their snarky back-and-forth dominated the conversation.

San Francisco Bay Guardian: I’ve got to start by asking you guys the obvious question, which is if you were familiar with the series Avatar: The Last Airbender before you signed on to the movie.

Nicola Peltz: Yes, I was. I actually have six brothers and a sister, and two of my younger brothers that are seven, we watch the cartoon all the time together. And when I got the role, they literally didn’t believe me. They were like, “You’re lying!” “No, I’m really not!” They’re really excited for me.

Jackson Rathbone: I knew of it, too. I hadn’t seen the entire series, but a lot of my really good friends had, so I told them I was going out for the role, and they were extremely impressed. It was nice to have my friends behind me on this one.

SFBG: How would you say the movie is different from the series, and do you think it’ll still appeal to those fans?

JR: I think it definitely will still appeal to all the hardcore fans, because the filmmakers were fans of the series themselves. [M.] Night [Shyamalan] really wanted to make the film for his daughters, who loved the series.

NP: Yeah, it was actually his daughter’s idea to make the film, because she fell in love with the series so much, and she loved the characters. And I think this movie’s so interesting because it is for all ages. It’s not like just a kids’ movie. A lot of grown-ups were into the cartoon as well.

JR: [laughs] I think with Twilight fans, there’s definitely a larger female fanbase, just based off the first two films. I think Eclipse is going to probably bring a lot more guys in. But for The Last Airbender, I find that it’s across the board. I mean, like Nikki’s just said, it’s kind of an all ages thing.

NP: It’s a family movie. You know, like some Friday nights, people go to them. It’s like the perfect movie, because everyone’s gonna love it. It’s not like the parents are going to be bored watching a kids’ movie.

JR: Yeah, it’s like the first Shrek. It’s a family film, except this is an action film so it’s going to be a lot more entertaining for everyone, because it’s really exciting. There’s all this martial arts, there’s all this special bending. It’s gorgeous.

SFBG: As a fan of the series myself, my main concern was if Appa [a “sky bison”] and Momo [a “winged lemur”] were involved in the movie. [Both appear in CG form.]

NP: Yes! Of course. It wouldn’t be a movie without Appa and Momo.

JR: You’ve gotta have those characters. They’re so much fun. My only regret is that I didn’t get to work with Momo as much.

NP: Yeah, same here. Actually, one of those scenes, I got to feed him a little peach. That was the only thing, but it was really cute.

SFBG: You’ve talked about how it’s a pretty intense action movie. How much stuntwork was involved?

NP: Yeah, there was a lot. I learned kung-fu and tai chi. I started in October last year, and then we went through the end of the movie, but we all went in February, moved to Philly and we did boot camp. We did hours and hours and hours a day, and it was so much fun. We got to do — did you do wire work? You did, right?

JR: I didn’t do wire work, because I don’t have special bending abilities. No, I just did mainly kung-fu, like hand-to-hand kind of kung-fu, and then they taught me wrestling and grappling moves. Because they wanted Sokka to be more like a young warrior, who doesn’t necessarily have the technical ability but he definitely has the heart. And a boomerang. And a really sharp wit.

NP: Oh, do you want to tell him what happened when you first tried to use your boomerang?

SFBG: Well, now I have to hear.

JR: OK, well, the boomerang’s a little bit different than the boomerang that you think of from Australia or whatever. But the shape is actually of a common, real boomerang. And so when I went to go throw it—

JR: Greenland is all rocks and ice! It’s everywhere. But I was throwing it up in an incline, it went straight up, and—

NP: It never came back.

JR: It went straight. It broke.

SFBG: But I assume your skills improved?

JR: Yeah, definitely, definitely. However, I did break like four boomerangs and three spears.

NP: Yeah, he had like six boomerangs throughout the movie.

JR: Well, that’s because I was learning to do tricks with them. I would like flip it behind my back and catch it and try to just make it as cool as possible.

NP: He would attempt, but…

SFBG: You guys definitely have this rapport down — you do seem like siblings. How did you develop that on set?

JR: Well, basically, the first day of filming, I picked Nicola up and I dunked her in a snowbank, to really get the brother and sister thing going. That’s the only reason.

NP: Oh, yeah, he was getting into character, as he tells everybody. But at the Kids’ Choice Awards, I got to slime him.

SFBG: That’s awesome. Although getting slimed is kind of a good thing. I would love to get slimed.

NP: Actually, it was fun. I tasted it.

NP: It was slimy.

JR: I had no choice but to taste it. So thank you.

SFBG: With all this back-and-forth, I feel like a fight is inevitable. If Sokka and Katara threw down, who would win?

JR: There’s no way Sokka would ever raise a fist to his little sister.

NP: OK, well, even if he did, I would win. Obviously. I’m a water bender! Please. He has a boomerang.

SFBG: Can you talk about what it was like working with M. Night Shyamalan?

JR: It was incredible. Being young actors, it’s one of those things, you get to work with somebody that you’ve respected and admired. He’s just an incredible artist and a really awesome, down-to-earth family guy.

NP: Yeah, he’s a really great guy. When I saw The Sixth Sense, I was like — it’s one of my favorite movies ever. And now I get to work with him, which is so much fun. Family and morals and values are really important to him, and it definitely shines in the movie. You can definitely tell. But he was so much fun to work with.

SFBG: He’s known for having a very particular mark. Does that carry over to The Last Airbender? Because this does seem very different from his past projects.

NP: Yeah, it is different. He did a lot of scary movies and this is a movie for all ages.

JR: It’s a family film. He did thrillers. With The Happening, he did his first R-rated film. And here with The Last Airbender, he’s doing his first family film. It’s an action, epic, fantasy adventure — there’s a lot of CGI. ILM did the CGI.

NP: We also went to Greenland, though. So a lot of it was real, which was really cool.

SFBG: Now you’ve probably been asked this before, but if you had to pick one bending power, what would you choose?

NP: Water! And I’m not just saying that because I’m a water bender in the movie. But water’s so interesting because it can harm you but it can also save you. It does heal people, but at the same time, there are tsunamis, which harm things. I think it’s the most interesting element.

JR: Oh, yeah, definitely. I’ve always been a big fan of Bruce Lee, and in his book, Artist of Life, he talks about how to be like water and what that means. You kind of go with the flow. Water can become strong and become like ice, and in it’s flowing form even, in hundreds of years, it’ll carve the Grand Canyon. Water’s a very powerful element.