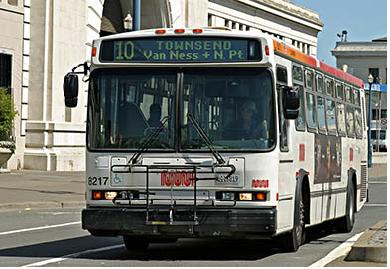 I’m never the one arguing that city workers should take pay cuts, furloughs, benefit cuts or layoffs when there are ways to bring in new revenue. Remember: Layoffs and furloughs are, by definition, service cuts. And it’s a good thing to have city employees make enough money to live in San Francisco, raise families, send their kids to college etc. Maintaining a middle class in San Francisco through public-sector jobs is a fine use of taxpayer dollars (particularly if those dollars can come from the rich).

But I have to say: The Muni workers union isn’t being very smart. Refusing to accept any concessions at a time when every other union in the city — particularly SEIU Local 1021, whose members typically earn a lot less money than the bus drivers — have stepped up to the plate and accepted painful cut is politically foolish.

And for the Muni union leaders to say that the system’s budget problems aren’t their responsibility sounds terrible. Most other city employee unions show some loyalty to the people they serve, and are interested in making their departments work, and understand that in very bad times, everyone’s got to give a little.

The problem is that Sup. Sean Elsbernd wants to change the way Muni workers are paid, and his ballot measure could lead to significant pay cuts and work-rule changes, things the union really doesn’t want. And every headline about Muni workers refusing concessions gives Elsbernd more signatures, more supporters and more votes.