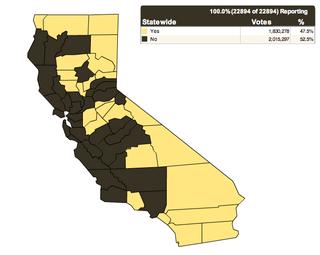 Well, maybe not everyone, but the results from last night’s election are fascinating. A $50 million campaign, with the opposition struggling to come up with $100,000 — and PG&E still lost. Calitics has a fun comparison that makes one of the key points: The company lost most heavily in its own service areas. People who have to deal with PG&E — and its high rates, poor service, blackouts, botched smart-meter program and financial greed — voted strongly against allowing the company to further entrench its monopoly power. In essence, PG&E lost at home.

A couple of other interesting factors: The results show, I think, that whatever you say about the decline of newspapers, their endorsements still matter. Every major newspaper in the state opposed Prop. 16, and that clearly had an impact. The No on 16 campaign didn’t have the money for any media buys; the press coverage and strong anti-PG&E endorsements had to carry the message.

TURN, Ross Mirkarmi, Mark Leno, Tom Ammiano and consultant Gail Kaufman deserve credit for raising what little money they could and leveraging it into a stunning statewide victory. Considering that the turnout skewed heavily Republican, the defeat of Prop. 16 will go down as one of the great progressive victories in California history.

The local numbers were astounding: In San Francisco, Prop. 16 went down 2-1, with 67 percent of the voters rejecting PG&E’s ploy. That’s the strongest mandate for public power I’ve ever seen. Same for the rest of the Bay Area: Alameda County, 64 percent No. San Mateo County, 60 percent No. Marin County, 61 percent No. Mayor Gavin Newsom ought to take a look at the map on the Secretary of State’s website; it shows that the voters he needs to get elected lieutenant governor have rejected PG&E and want a public-power option.

The collapse of PG&E’s attempt to buy democracy in California gives San Francisco some breathing room on its community choice aggregation contract, which is excellent news. The supervisors can now take some time to go over the details — and prepare for the next major battle, the marketing campaign to education local residents about the value of community-controlled green energy.

PG&E is clearly on the run — CEO Peter Darbee has driven the company to a point where it has no friends left. Could be a great era for public power efforts.