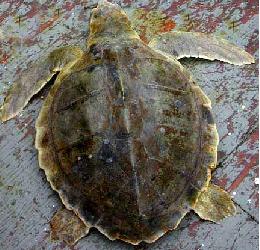 MEXICO CITY (June 3rd) — The turtles of Caribbean Mexico are an ancient race. Their ancestors paddled with dinosaurs and prehistoric fish. Kemp’s Ridley turtles were burying their eggs in Gulf Coast sanctuaries countless millennia before the Olmecs, Mexico’s matrix civilization, installed their mysterious giant heads on the Veracruz plain. The presence of turtles in indigenous iconography is evidenced by artifacts displayed in anthropological museums in Mexico City and Jalapa Veracruz. The 20th Century naturalists recorded “arribos” (“arrivals”) of tens of thousands of Kemp’s Ridley females at Rancho Nuevo beach Tamaulipas; with few exceptions, Kemp’s Ridleys (named for an amateur turtle-ologist and the smallest and rarest of all sea turtles) nest only at Rancho Nuevo and Padre Island, Texas.

But for Gulf waters, turtles are like canaries in the coalmines. The 1979 blowout of Ixtoc 1, a Mexican National Petroleum Company (PEMEX) platform off the southern state of Tabasco, gushed uncontrollably for nine months. Some 3,000,000 barrels spewed into the Gulf of Mexico, fouling beaches and nesting grounds. The Rancho Nuevo arribos shrank below 4,000. Although Mexican Kemp’s Ridleys have staged a modest comeback (the population is now calculated at 8,000), the April 20th explosion of a British Petroleum deep-sea drilling rig on the Macondo Prospect (with apologies to Gabriel Garcia Marquez) 130 miles southeast of New Orleans could spell doomsday for these primordial creatures.

Across the Gulf, Mexican authorities are watching this travesty unfold with furrowed brows. The blow-out of the Deepwater Horizon platform that killed 11 and wounded 17 workers is now the largest oil spill in U.S. history, almost doubling the size of the Exxon Valdez fiasco in Alaskan waters (10,000,000 gallons) and threatening biblical devastation of Caribbean wildlife from Mexico to Cuba. Already, Gulf Coast fishing grounds have been shut down, shrimp and oyster beds contaminated, colonies of marine mammals such as dolphins and manatees are menaced, and bird life, particularly brown pelicans, is at extreme risk. In just the first 20 days of the catastrophe, 156 dead Kemp’s Ridley sea turtles were counted.

The good news — at least for Mexico — is that deep-water oil plumes have been caught up in loop currents that threaten environmental mayhem as far east as the Florida Keys and Communist Cuba, but will not touch home. The bad news is that, come August, when the hurricane season blows in (2010 is being touted as a record year for tropical hurricanes with 15 giant storms headed for the Caribbean and the Gulf of Mexico), those currents will shift dramatically south towards Mexico. Even now, deep water “cyclones” are sweeping gobs of oil towards Veracruz and Tamaulipas turtle breeding grounds, and Mexico’s environmental secretary, Rafael Elvira, is preparing to file suit against BP, whose $325 billion earnings in 2009 is larger than Mexico’s total annual budget.

BP efforts to plug the leak with everything from old tires to tons of mud, robot submarines and never-before-tested “domes” have met with serial failure. A slant drill to relieve pressure on the undersea gusher will not be in place until August, when the currents turn towards Mexico. Kemp’s Ridleys nest from April through August.

President Felipe Calderon’s brow is further corrugated by the prospect that the mammoth BP spill will torpedo his pledge to privatize (he calls it “modernize”) both Mexico’s oil industry and PEMEX, the national petroleum consortium. The explosion of the Deepwater Horizon, a joint venture between BP, Halliburton, and TransOcean (controlled by a Swiss holding company), has certainly slowed, if not slain, Calderon’s plans to contract similar transnationals for deep sea drilling in Mexico’s slice of the Gulf.

According to U.S. Department of Energy evaluations, Mexico has only nine years of proven reserves left before it becomes a net oil importer. Major offshore wells like Cantarell in the Sound of Campeche are played out, and no new land-based deposits have been located. Rummaging through the remains of the old Chicontepec field in Veracruz (Halliburton is an important subcontractor) has yielded meager results.

One joke making the rounds has Calderon delighted by the BP spill, because it will bring more oil to Mexican waters.

In the vision of Big Oil, Mexico’s only hope for economic survival lies in its “aguas profundas,” or deep waters, five miles down in the Gulf. Of course, only Big Oil has the technology to get at these riches. According to the transnationals, PEMEX must be reformed and partner up with them (“an association of capitals”) for a percentage of the take. So-called risk contracts are currently barred by the Mexican Constitution.

Following orders from his backers (Halliburton, the number one PEMEX subcontractor, was a generous contributor to Calderon’s fraud-tarred 2006 election victory), the Mexican president submitted “energy reform” legislation to Congress in 2008 that laid out a “strategic alliance” with Big Oil and “flexibilization” of PEMEX opening the state company to private investment and risk contracts. The Calderon media machine cranked up an infomercial campaign depicting an azure Caribbean under which Mexico’s true wealth lay buried. “The Treasure of Mexico” was repeatedly shown at prime time on this distant neighbor nation’s two-headed television monopoly, Televisa and TV Azteca.

Mexico is fast running out of oil, the president warned to make his point. Deep sea drilling is the only option. “Energy reform” was put on congressional fast track.

By seeking to privatize Mexico’s petroleum industry, Felipe Calderon is swimming against global currents. World-class producers like Russia and Saudi Arabia are consolidating their state-run oil companies, Glasprom and Aramco, rather than selling them off to the private sector.

Petroleum is a volatile liquid in the Mexican mix. Oil and sovereignty have been joined at the hip ever since depression-era president Lazaro Cardenas expropriated and nationalized the industry in 1938 from Anglo and American owners — the so-called Seven Sisters — when they defied the Mexican Supreme Court during an oil workers’ strike. Those opposed to Calderon’s scheme went into hullabaloo mode to push back his privatization legislation.

Ex-left presidential candidate Andres Manuel Lopez Obrador, from whom many Mexicans believe Calderon stole the 2006 election, organized his social base and the “Adelitas,” women partisans dressed up as “soldaderas” or female fighters in the Mexican revolution, donned sombreros and long skirts, toy carbines and bandaleros of fake bullets crisscrossed across their breasts, and encircled the Mexican Senate. Inside both houses of congress, Lopez Obrador’s colleagues seized the podiums and paralyzed all legislative activity for ten days.

The stand-off resulted in a series of nationally televised debates over the next four months during which energy experts, academics, Big Oil reps, PEMEX honchos, lawyers, leftists, senators, deputies, impresarios, and even a poet or two argued about the privatization proposal. The debates were carried live on a big screen in the great Zocalo plaza, where hundreds of outraged citizens gathered every afternoon to cuss out the privatizers.

By autumn 2008, a compromise was struck between Calderon’s PAN party and the former ruling PRI, which still holds a majority in both houses. Anti-Lopez Obrador elements within the left-center PRD also signed off on the deal, which delineated hundreds of exploration tracts in Mexican deep sea waters, but put a hold on transnational participation and risk contracts. The compromise did not please the transnationals, but Calderon okayed it reluctantly and was preparing fresh legislation to assuage their concerns when the Deepwater Horizon blew out at the bottom of the Gulf, putting the kibosh on Big Oil’s pipedreams.

The struggle to stop the privatization of PEMEX is symbolic and illusory. Thirty one out of the company’s 41 divisions are, in effect, subcontracted out to the likes of BP and Halliburton;  most contracts are concentrated in the PEP or exploration and perforation sector. Ironically, players like BP, the biggest producer in the Gulf of Mexico today, and Shell are reincarnations of British interests that dominated petroleum production in Veracruz before expropriation — Royal Dutch Shell evolved from Lord Cowdry’s (Weetman Pierson) Aguila Oil. Moreover, Exxon is reported to be dickering for BP (which now incorporates Amoco and Atlantic-Richfield), a merger that would restore John D. Rockefeller’s Standard Oil taken down by trustbusters in 1911. Standard Oil’s James Doheny and Pierson ruled Mexican oilfields before 1938, and once threatened to secede and form their own “Republic of The Gulf of Mexico.”

The U.S. and Mexico dispute a pair of potentially abundant fields in the deep waters of the Gulf. Designated “Donas,” the eastern polygon is triangulated between the Yucatan, New Orleans, and Cuba. The much-larger (16,000 square kilometers) western polygon sits between Tamaulipas and Texas. Mexico’s share of the western “Dona” (62%) purportedly holds up to 34,000,000,000 barrels, twice current reserves.

Preliminary delineation of the Donas was agreed upon by Washington and Mexico City in 2000, and deep-sea drilling is set to begin as early as next year. Chevron and Shell have reportedly already won contracts to work the U.S. sites. But Mexico does not have the technology to get at its “treasure” and Houston oil guru George Baker confirms that it will be another decade before PEMEX comes into possession of the tools to drill baby drill at such depths.

Advocates for continued state control of Mexico’s oil like Professor Fabio Barbosa of the National Autonomous University (UNAM) rebut the claim that PEMEX cannot drill deep, citing development of the Nab platform in mile-deep waters off Yucatan  (the Dona reserves are thought to be three to five miles down in the Gulf.)

In a recent El Universal op-ed, Barbosa recalled then-BP vice president Cris Sladen’s warning to a 2006 oil conference in Veracruz that Mexico would go belly-up if it didn’t dissolve PEMEX and let the latest version of the Seven Sisters handle the deep sea exploration and drilling.

Closer to the bottom of the food chain, the voices of the turtles are not heard in this debate between privatizers and nationalists. Deep sea drilling presages unprecedented carnage for their already exhausted species. BP itself has an unblemished record of species genocide — its Arctic projects threaten protected bowhead whales in the Beaufort Sea and a 900,000 gallon spill in Prudhoe Bay in 2000 plus its plans to trash the Alaska National Wildlife Refuge put dozens of species, from Polar bears and caribou to the Arctic tern, the longest-flying migratory bird on Planet Earth, on the brink of extinction.

In an exhibition of unbridled cynicism, BP greenwashes its tarnished image with full-page New York Times professions of its concern for the environment and by handing out conservation awards and grants. So far as is known, no Kemp’s Ridley sea turtle has ever won one.

The indigenous peoples of the Pacific Northwest liken the American continent to the back of a turtle — humans are allowed to live on it but must do so in harmony with the planet. “Turtle Island” is the translation of the name of the place where we live in several Indian languages, a designation that once lent its name to Gary Snyder’s Pulitzer Prize-winning poems imploring environmental respect and salvation.

But the poet’s metaphors do not carry much weight in the boardroom. BP and its cronies in corporate crime and capitalist greed have put Turtle Island at the top of their hit list.

John Ross is back in “El Monstruo,” the title of his latest cult classic (“pulsating and gritty” the NY Post) and can be reached at johnross@igc.org