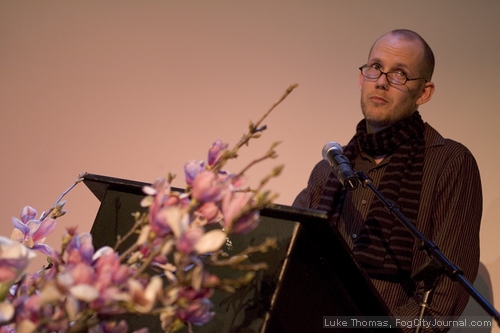 Oliver Luby has long been the most public-spirited employee of the San Francisco Ethics Commission, the one person in that office who repeatedly exposed powerful violators of campaign finance rules and blew the whistle on schemes to make the system less transparent and effective, drawing the ire of Director John St. Croix and Deputy Director Mabel Ng in the process.

St. Croix repeatedly tied to silence and punish Luby, who fell back on civil service and whistle-blower protections to save his job as a fines collection officer and continue doing it properly. But it appears St. Croix has finally succeeded in ousting Luby, who this week was notified that his last day will be June 11.

During budget season last year, at a time when St. Croix was trying to punish Luby for sounding the alarm about a new campaign finance database would effectively delete important data (something St. Croix defended but the vendor, NetFile, later corrected), St. Croix quietly removed a special condition for Luby’s job that required at least 12 months campaign finance experience.

So when Mayor Gavin Newsom ordered more than 400 layoffs of city employees to balance the budget, Luby’s job was just another 1840 level position, subjected to being taken by someone from another department with more seniority, which is what happened when Ernestine Braxton, a junior management assistant with the Department of Public Works, took the job.

When I asked St. Croix about why he removed the special condition from Luby’s job and whether it was retaliation for his battles with Luby, St. Croix told me, “You want me to talk about a personnel matter and I’m not going to talk about it.”

Yet Luby says its clear the St. Croix targeted him for removal. “Once that condition was removed, it was only a matter of time before I was bumped by someone in the same civil service job class but with greater seniority,” Luby wrote in a message to supporters, adding that he’s still figuring out what his options are.

Luby first got on the wrong side of Ethics Commission management back in early 2004 when he and fellow employee Kevin DeLiban accidentally were sent a memo from the office of campaign attorney Jim Sutton, treasurer for the Newsom for Mayor campaign, detailing a scheme to illegally pay off campaign debts with money laundered through Newsom’s inauguration committee.

Ng and then-director Ginny Vida ordered them to destroy the document, but they saved a copy and exposed the scheme, which Sutton then backed away from implementing (the pair was publicly honored for their efforts). But Luby continued to have professional differences with Vida’s replacement, St. Croix, often over the favorable treatment given the clients of Sutton, who runs the most expensive and deceptive campaigns on behalf of powerful downtown corporations and organizations (and whose hiding of a late PG&E contribution to defeat a 2002 public power measure resulted in a largest fine Ethics ever ordered).

For example, in 2007, Luby wrote a memo showing how enforcement actions by Ethics disproportionately targeted small campaigns (often by progressive candidates) and ignored serious violations by the most powerful interests in the city (which, if pursued, would have resulted in big fines, money the city desperately needs). We at the Guardian obtained the memo and wrote a story, causing St. Croix to order Luby to not longer write memos recommending way to improve operations at Ethics. And in November 2008, Luby wrote an op-ed in the Chronicle showing how St. Croix had ignored and covered up campaign finance law violations at City College of San Francisco that later led to the criminal indictment of former Chancellor Phil Day (whose trial is expected to begin later this year).

With each of these battles, Luby was threatened by St. Croix and had to seek support from his union, SEIU Local 1021, and the protection of civil service and whistleblower laws. But now, it appears that San Franciscans are losing the only person in the Ethics Commission that could be trusted to act in the interests of the city and the public.