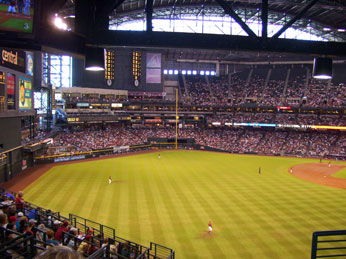 In their letter to the MLB’s Selig, Herrera and Campos call the new Arizona law, “an unambiguous and direct threat to the liberty of millions of Americans who are Latino or who may appear to be of foreign origin. And it comes as the debate over immigration ramps up nationwide, spilling over into city council chambers and federal court houses, as well as onto baseball fields, as rightwing electeds in Texas, Colorado and now Oklahoma boast of plans to introduce similar legislation to Arizona.

“Arizona’s new law goes far beyond merely pushing the envelope of a politically contentious issue,” Campos and Herrera state. “It is a direct and tangible threat to the fundamental rights of many Major League Baseball players and fans, and an affront to millions of Americans who are — or who may appear to be — of foreign heritage.”