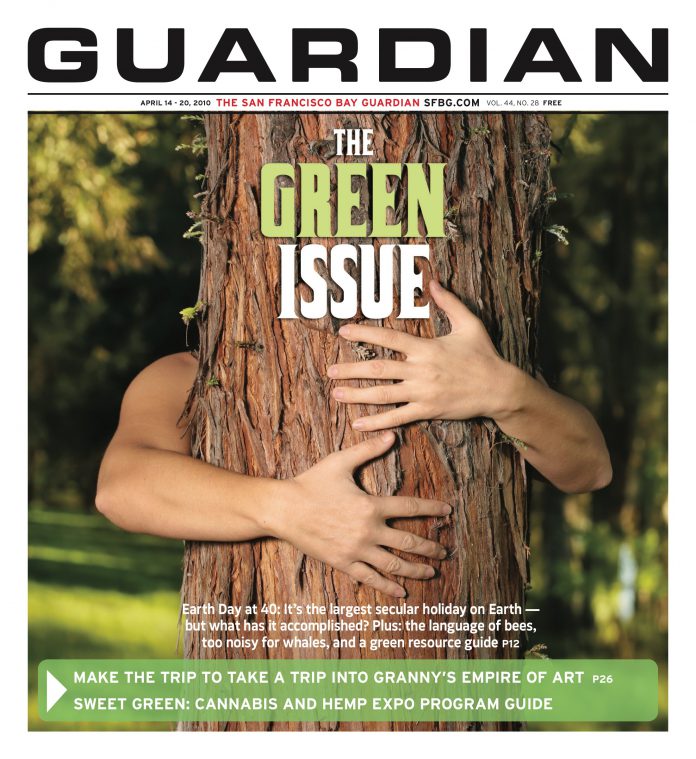 
GREEN ISSUE The heavens welcomed Earth Day to America. All over the country, April 22, 1970 dawned clear and sunny; mild weather made it even easier to bring people into the streets. The Capitol Mall was packed, and so many members of Congress were making speeches and appearing at events that both houses adjourned for the day.


Mayors, governors, aldermen, village trustees, elementary school kids, Boy Scout troops, labor unions, college radicals, and even business groups participated. In fact, the only organization in the nation that actively opposed Earth Day was the Daughters of the American Revolution, which warned ominously that "subversive elements plan to make American children live in an environment that is good for them."


By nightfall, more than 20 million people had participated in the First National Environmental Teach-In, as the event was formally known. It established the environmental movement in the United States and helped spur the passage of numerous laws and the creation of hundreds of activist groups.


It was, by almost all accounts, a phenomenal success, an event that dwarfed the largest single-day civil rights and antiwar demonstrations of the era — and the person who ran it, 25-year-old Denis Hayes, wasn’t happy.


His concern with the nascent movement back then says a lot about where environmentalism is 40 years later.


Gaylord Nelson, a mild-mannered U.S. senator from Wisconsin, came up with the idea of Earth Day on a flight from Santa Barbara to Oakland. Nelson was the kind of guy who doesn’t get elected to the Senate these days — a polite, friendly small-town guy who was anything but a firebrand.


A balding, 52-year-old World War II veteran who survived Okinawa, Nelson was a Democrat and generally a liberal vote, but he got along fine with the die-hard conservatives. He kept a fairly low profile, and did a lot of his work behind the scenes.


But long before it was popular, Nelson was an ardent environmentalist — and he was always looking for ways to bring the future of the planet into the popular consciousness.


In August 1969, Nelson was on a West Coast speaking tour — and one of his mandatory stops was the small coastal city that seven months earlier had become ground zero for the environmental movement. Indeed, a lot of historians say that Earth Day 1970 was the coming out party for modern environmentalism — but the spark that made it possible, the event that turned observers into activists, took place Jan. 28, 1969 in Santa Barbara.


About 3:30 on a Tuesday afternoon, a photographer from the Santa Barbara News Press got the word that something had gone wrong on one of the Union Oil drilling platforms in the channel just offshore. The platforms were fairly new — the federal government had sold drilling rights in the area in February 1968 for $603 million, and Union was in the process of drilling its fourth offshore well. The company had convinced the U.S. Geological Survey to relax the safety rules for underwater rigs, saying there was no threat of a spill.


But shortly after the drill bit struck oil 3,478 feet beneath the surface, the rig hit a snag — and when the workers got the equipment free, oil began exploding out. Within two weeks, more than 3 million gallons of California crude was on the surface of the Pacific Ocean, and a lot of it had washed ashore, fouling the pristine beaches of Santa Barbara and fueling an angry popular backlash nationwide.


Nelson received an overwhelming reception at his Santa Barbara talk — and horrified as he was by the spill, he was glad that an environmental concern was suddenly big news. But, as he told me in an interview years ago, he still wasn’t sure what the next steps ought to be — until, bored on an hour-long flight to his next speech in Berkeley, he picked up a copy of Ramparts magazine.


The radical left publication, once described as having "a bomb in every issue," wasn’t Nelson’s typical reading material. But this particular issue was devoted to a new trend on college campuses — day-long "teach-ins" on the Vietnam War.


Hayes was a student in the prestigious joint program in law and public policy at Harvard. He’d been something of a campus activist, protesting against the war, but hadn’t paid much attention to environmental issues. He needed a public-interest job of some sort for a class project, though, so when he read a newspaper article about the senator who was planning a national environmental teach-in, he called and offered to organize the effort in Boston. Nelson invited him to Washington, was impressed by his Harvard education and enthusiasm, and hired him to run the whole show.


The senator was very clear from the start: the National Environmental Teach-In would not be a radical Vietnam-style protest. The event would be nonpartisan, polite, and entirely legal. Hayes and his staffers chafed a bit at the rules (and the two Senate staffers Nelson placed in the Earth Day office to keep an eye on things), and they ultimately set up a separate nonprofit called the Environmental Action Foundation to take more aggressive stands on issues.


Meanwhile, Hayes did the job he was hired to do — and did it well. Everywhere he turned, from small towns to big corporations, people wanted to plug in, to be a part of the first Earth Day. Many wanted to do nice, noncontroversial projects: In Knoxville, Tenn., students decided to scour rivers and streams for trash to see if they could each clean up the five pounds of garbage the average American threw away each day. In dozens of communities, people organized tree-plantings. In New York, Mayor John Lindsay led a parade down Fifth Avenue.


A few of the actions were more dramatic. A few protesters smashed a car to bits, and in Boston, 200 people carried coffins into Logan International Airport in a symbolic "die-in" against airport expansion. In Omaha, Neb., so many college students walked around in gas masks that the stores ran out. But it was, Hayes realized, an awful lot of talk and not a lot of action. The participants were also overwhelmingly white and middle-class.


Hayes wasn’t the only one feeling that way. In New York, author Kurt Vonnegut, speaking from a platform decorated with a giant paper sunflower, added a note of cynicism.


"Here we are again, the peaceful demonstrators," he said, "mostly young and mostly white. Good luck to us, for I don’t know what sporting event the president [Richard Nixon] may be watching at the moment. He should help us make a fit place for human beings to live. Will he do it? No. So the war will go on. Meanwhile, we go up and down Fifth Avenue, picking up trash."


Hayes finally broke with the politics of his mentor early on Earth Day morning when it was too late to fire him. The next day, the National Environmental Teach-In office would close and the organization would shut down. From that moment on, he could say what he liked and not worry who he offended.


"I suspect," he told a crowd gathered at the Capitol Mall, "that the politicians and businessmen who are jumping on the environmental bandwagon don’t have the slightest idea what they are getting into. They are talking about filters on smokestacks while we are challenging corporate irresponsibility. They are bursting with pride about plans for totally inadequate municipal sewage plants. We are challenging the ethics of a society that, with only 6 percent of the world’s population, accounts for more than half the world’s annual consumption of raw materials.


"It will be a difficult fight. Earth Day is the beginning."


I first met Hayes in 1990, near the office in Palo Alto where he was planning the 20th anniversary of Earth Day. He’d continued his environmental work inside and outside government, at one point running the National Energy Laboratory under President Jimmy Carter. Earth Day 20 was shaping up as a gigantic event, one that would ultimately involve 200 million people around the globe. Earth Day was becoming the largest secular holiday on the planet.


Hayes was excited about the event, which he was running this time without the moderating influence of a U.S. senator. And he was aiming for a much more activist message — in fact, at that point, he was pretty clear that the U.S. environmental movement was running out of time.


"Twenty years ago, Earth Day was a protest movement," he told a crowd of more than 300,000 in Washington, D.C. "We no longer have time to protest. The most important problems facing our generation will be won or lost in the next 10 years. We cannot protest our losses. We have to win."


And now another 20 years have passed — and by many accounts, we are not winning. Climate change continues, and even accelerates; an attempt at a global accord just failed; and Congress can’t even pass a mild, watered-down bill to limit carbon emissions.


And Hayes, now president of the Bullitt Foundation, a sustainability organization in Seattle, thinks the movement has a serious problem. "Earth Day has succeeded in being the ultimate big tent," he told me by phone recently. "To some rather great extent, is had some measure of success."


But he noted that "in American politics these days, it’s not the breadth of support, it’s the intensity that matters. Environmentalists tend to be broadly progressive people who care about war and the economy and health care. They aren’t single-issue voters. And somehow, the political intensity is missing."


Hayes isn’t advocating that environmentalists forget about everything else and ignore all the other issues — or that the movement lose its broad-based appeal — but he said it’s time to bring political leaders and policies under much, much sharper scrutiny and to "stop accepting a voting record of 80 percent."


It’s hard today to be bipartisan, and compromise is unacceptable, Hayes told me. "I was probably right [in 1990]," he said. "If what you’re aspiring to do is stop the greenhouse gases before they do significant damage to the environment, it’s too late." At this point, he said, it’s all about keeping the damage from turning into a widespread ecological disaster.


"I would like to see Earth Day 50 be a celebration," he said. "I would like to see by then a real price on carbon, nuclear power not proliferating, and a profound, stable investment in cost-effective, distributed renewable energy." But for that to happen, "we need to have a very intense core of environmental voters who realize that these threats to life on the planet are more important than a lot of other things."


Tim Redmond is the author, with Marc Mowrey, of Not In Our Back Yard: The People and Events that Shaped America’s Modern Environmental Movement (William Morrow, 1993) which can still be found in the remainder bins of a few used book stores.