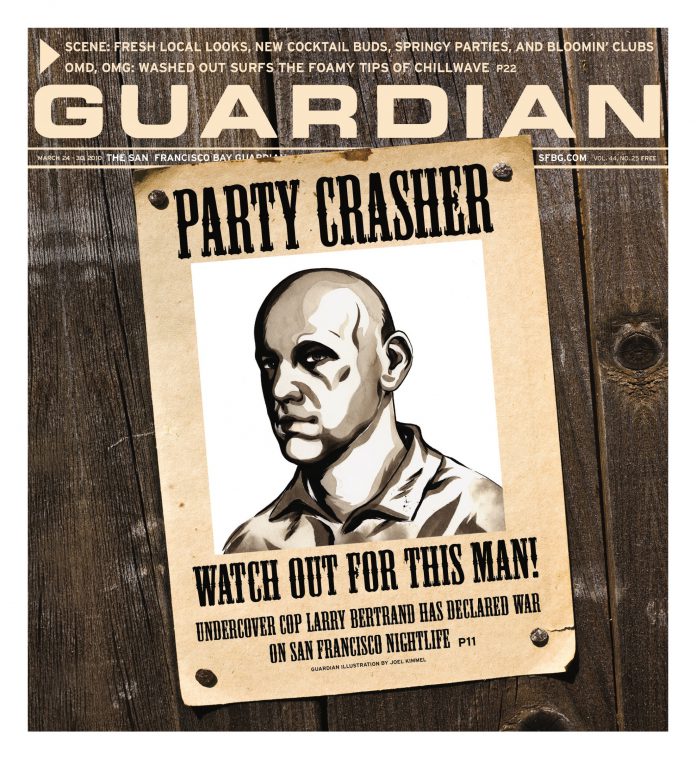 SUPER EGO Your kiki, cross-eyed club correspondent just returned, ass-tanned and full of mescal, from Mexico D.F. You’d think with all the lithe, young emo Altinos running around the bright and trash-strewn apocalyptic neighborhoods, their anime hair-spikes poking through the eye-level smog, there’d be a hopping alternaqueer club scene. But no — although Marrakech mixed in some thrashy Mexi-core with retro-electro hits and Tom’s Leather Bar (no leather, but lots of opera and a surprise Dutch blowjob — don’t ask) served up bored go-gos so over it they surely must have been parodying the concept of bored go-gos. Tal vez no pensaron en esto. And El Viena brought some boot-kicking banda, bringing to mind our own outstanding La Bota Loca party, Saturdays at Oakland’s Club 21 (www.club21oakland.com).

Otherwise, it was wall-to-wall Gaga. I blame NAFTA. Still, the drag saved it. The regal, bodystockinged reinas of Butterflies had me choking on my free peanuts, singing along to Celia Cruz, and the heartfelt, ramshackle performances at Oasis floated on a sea of waved white hankies and tossed carnations. But the most magical moment happened at Club 33. Mexico City nightlife is in turmoil at the moment — a recent spate of violence has forced bars to close earlier than usual. So, at precisely 2 a.m., to avoid police attention, we were locked inside the tiny, dark, hipster-strewn 33, speakeasy-like, while a dead-on drag impersonation of ranchera legend Paquita La Del Barrio (who recently said she’d rather see a child die than be adopted by a gay couple, que?) crooned us into ethereal swoons beneath a dinky mirrorball. D.F. I love you.

OK, I’m officially weirded out that Swedes are everywhere again. But hey, if they can Nordic-track the hip and the hop like rhymesters Looptroop, Adam Tensta, and Timbuktu and Chords then I’m all blue-eyed with it. They’ll be showing off the multicultural side of state socialism, with hyper-eclectic styles and jokester flair.

If you missed DJ Greg Wilson at Triple Crown last week, I weep for you. The tasty, spooky rare funk, disco, global, soul, and New Wave re-edit wave keeps rolling over us, however. New York hottie Prince Language keeps it tight, chopped, and almost familiar — from Sharon Redd to the Rapture, Ahmed Fakroun to the Droyds.

Yes, we may have seen it all from the Trannyshackers — but trash drag can never really jump the Trannyshark. It’s foolproof! One of the club’s bloody jewels in its crown of regular tribute nights is this stardust fete, featuring, like, 40 queens and DJ Omar. (Watch for my favorite thin white drag, Kiddie.)

Gays: they are animals. Yet they’re so full of benefits. Combine your love of skinny, hairy queers with your yearning for philanthropy at this fuzzy shindig. Lightly furred cuties take the stage for a “Hot Otter Contest” (hopefully manscape-free), while $10 beer bust proceeds go to benefit the Marine Mammal Center. DJ Bus Station John helps you lick down to the stick. Purposes for porpoises? Positively.

If you haven’t checked out Temple’s sci-fi warper “Stargate-Portal Room” designed by artist Xavi, then this hyperdimensional celebration is calling out to you across the galaxy. Get alien with tech-breaks, acid crunk psych-heroes an-ten-nae, Deru, Lotus Drops, Phalanx, Drag’nfly, and dozens others.