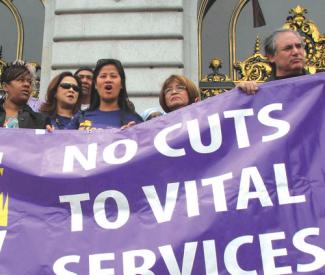 In a stunning repudiation of the union leadership installed by Service Employees International Union President Andy Stern – whose autocratic style, aggressive expansion, and friendly relationships with big employers has caused a rift in the national labor movement – members of SEIU Local 1021 have voted overwhelmingly for a reform slate of new leaders.

As we wrote recently, the stakes were high here in San Francisco, where the old guard leaders threatened to undermine the union’s progressive tendencies just as Mayor Gavin Newsom is threatening mass layoffs and pay cuts for city employees, and the San Francisco Labor Council’s ideological balance was being tipped by the pro-development push of the building trades.

But the results couldn’t have been more clear in the first local election since Stern installed the Local 1021 after merging 10 union locals together, including the former Local 790, which represents most city employees. Stern’s whole slate was voted out by a substantial margin, including current President Damita Davis-Howard, who had 1445 votes to the 2141 votes garnered by Sin Yee Poon, who now takes over the top spot after having led SF Human Services Agency workers.

Also pushed out was James Bryant, a political ally of Newsom and enabler of Pacific Gas & Electric and other downtown power brokers, who was defeated in his run for Political Action Committee Chair. Alysabeth Alexander, who is in her 20s, beat him by a vote of 2552-1506.

The vote will certainly strengthen the hand of progressives in San Francisco going into what’s expected to be a tough budget fight with Newsom, as well as helping progressive supervisorial candidates in the November election against what is expected to be a strong push by downtown to break the progressive majority on the Board of Supervisors.

In addition, it could roil SEIU’s internal politics after a turbulent year, in which Stern created divisive clashes with his own local health care workers (causing Sal Rosselli to create the rival National Union of Healthcare Workers), UNITE-HERE, and the California Nurses Association.

The press release from the winning reform slate follows:

On Friday, thousands of public sector votes were counted to determine the future leadership of one of the largest unions in Northern California.  This is the first election for SEIU 1021, formed only three years ago after the merging of 10 locals.

The reform slate, Change 1021, swept the elections taking a clear majority of the executive leadership seats. This all-member slate easily defeated the former administration-appointees by the International SEIU.  Some candidates won by a 3 to 1 margin while others enjoyed a comfortable 2 to 1 lead on their opponents. See attached list of election results.

“We are excited about the opportunity to give the leadership of this Union back to the membership,” stated Karen Bishop, the San Francisco County Area Representative Elect.  Former San Francisco Board of Supervisors President and current Chair of the San Francisco Democratic Party  Aaron Peskin agreed, affirming, “It is very heartening to see that real democracy has prevailed.”

Change 1021 campaigned on a platform for reform, seeking a stronger union that would prioritize member representation at work sites; fiscal transparency; and an internal democratic structure. “Members spoke with their votes, sending a clear message about priorities,” said Roxanne Sanchez, President Elect.

The challenges for the new board are daunting-they must reunite and reinvigorate a membership hit hard by the economic downturn, with thousands to receive lay-off notices this week.  The Board Elect is ready to make the budget fight a priority to fight layoffs and preserve important public and non-profit services for our communities.

“Our members have spoken, loudly and clearly, that business as usual is absolutely no longer tolerable and that a fundamental change in the focus of our union towards the needs and priorities of our members are in prompt order,” says Sin Yee Poon, Chief Elected Officer Elect. For now, there is cause for celebration as the congratulatory calls have been flooding across California from members, elected officials, labor leaders, and community partners.

Newly  elected members will assume office at the next Executive Board meeting, March 9th.   International Union leaders are expected to be in attendance.