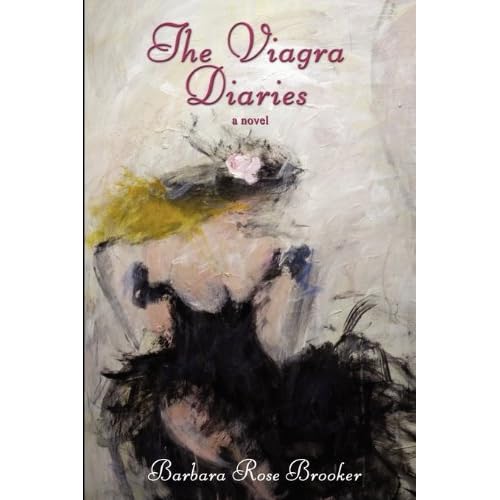 If the idea that a mainstream San Francisco newspaper would publish a weekly sex/dating column called The Viagra Diaries — targeted at local singles over the age of sixty — sounds like a work of fiction, it’s not because Violet Blue isn’t in her sixth decade yet.

The Viagra Diaries is a novel by Barbara Rose Brooker, a 73-year-old local writer whose latest protagonist happens to be a septuagenarian dating columnist named Anny Applebaum. [No doubt revered Russian historian and political journalist Anne Applebaum is tickled — Ed.] The name of Applebaum’s fictional column supplies the book’s title. Old but hardly wise, Anny struggles with personal finance and falls into a messy relationship with an emotionally unavailable older man. Given that Anny shares Carrie Bradshaw’s mental age, perhaps it makes sense that her column is more like “Sex and the City” than “Sexually Speaking with Dr. Ruth.”

Known to Anny’s readers as “Mr. X,” Marv is a 75-year-old diamond dealer whose merits include being addicted to JDate, constant cheating, and lusting helplessly after women who are too young for him. He wears a flashy gold Rolex and drives a Mercedes convertible. His eloquence is revealed in statements like, “I love all sports. I ski all over the world. My first wife was a champion French skier. She ran off with her trainer and died in a ski accident.” Ever drawn to the bad boy, ingenue Anny enters into a mostly-NSA sexual relationship with Marv, and the emotional detritus provides fodder for her column. Brooker’s novel seems to argue that poor decision-making skills, romantic and otherwise, are not wasted on the young.

Brooker sold the movie rights to The Viagra Diaries and has appeared recently on the morning talk circuit promoting her book. Her goal, she’s said, was to show that old age doesn’t necessitate BINGO and nursing homes, that old people can have successful careers, grand aspirations, and good sex too. This argument, to which Sophia Loren is a walking testament, is hardly new. At one extreme, I suppose you have something like 77-year-old Philip Roth’s The Humbling, featuring a sexually-potent protagonist in his mid-sixties who likes a lesbian threesome every now and again, and on the other, something like this.

The Viagra Diaries is addressed to a particular type of older woman. Helen Gurley Brown would read this book. Doris Lessing and A. S. Byatt would not. But by its intended audience, The Viagra Diaries will be well-received. Joan Rivers, not known for being easy to please, described it as “a poignant picture of dating, romantic love, parenting an adult daughter, and sex after sixty.” Brooker is no belletrist, but she manages to unassumingly, sometimes even unintentionally, charm. With scaffolding borrowed from the much-loved chick lit canon, her characters are immediately recognizable to anyone who has ever read a matte-finished paperback with a stylized handbag or lipstick tube on the cover. It makes perfect sense for Anny and Marv, old though they be, to fashion themselves after Candace Bushnell and Helen Fielding characters. What better method can there be to feeling young-at-heart than to indulge in the immature follies of the young?