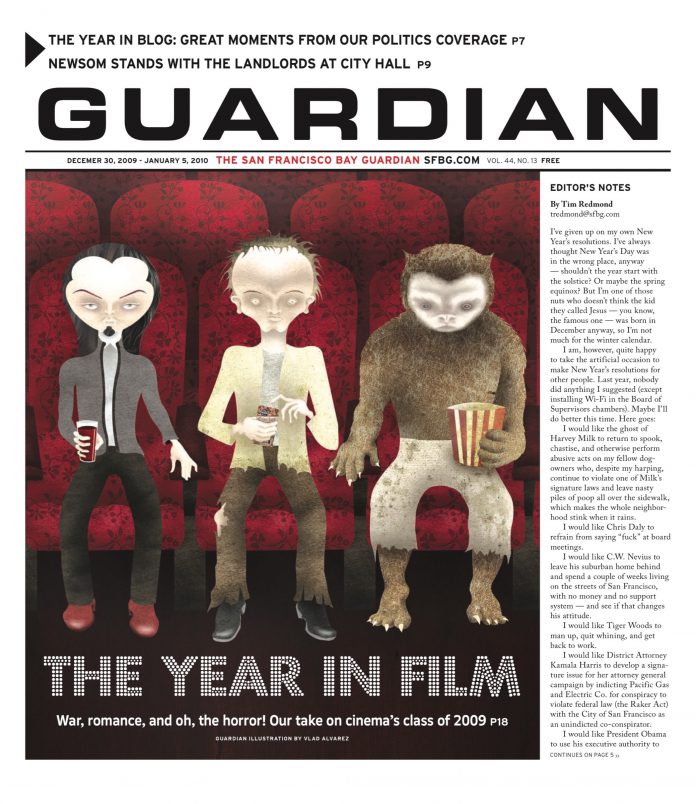 SONIC REDUCER Ah, if only one could give the gift of foresight, how many of us would just throw in the towel, ditch the bitching squeeze, and descend into a netherworld of never-again when faced with the prospect of a dubious New Year’s Eve celebration? Oh, the effing pressure to perform, to live it up and to have a ball, especially when booting out a good-riddance-already year like ’09.

Yet who wants to send it out with a whine rather than on a note of sublime? Who wants to crash to the curb rather than kicking it with joyful liberation and libation? Not I, La Reducer. So let me take the effort out of the forced merriment, remove the angst from the party ranks: here’s the best New Year’s Eve plan for everyone — no matter how magnificent or misguided, buttoned-up or taste-challenged they may be. Pick your NYE poison — then take two Advil and drink a big glass of water before you pass out during the warmed-over breakfast buffet the following morning, at the start of a new decade.

For my keeping-it-casual soul music maestro with a taste for the live jammies The Roots keep their distance from that adorable but far-too-desperate-to-please Jimmy Fallon for NYE and break out the deep originals, assisted by the sprawling SoCal Orgone, at this “sneakers required” beatdown. 9 p.m., $72–$95. Warfield, 982 Market, SF. www.goldenvoice.com

For your too-cool coworker with the asymmetrical crop and the skinniest jeggings on the block Too hep to 12 step? Glass Candy’s nouveau disco darlings Ida No and Johnny Jewel make you wanna strive for the next level in awesome. With Desire. 9 p.m., $45. Rickshaw Stop, 155 Fell, SF. www.rickshawstop.com

For that shy, retiring indie-rock cutie-pie with a sweetly sunken chest and a song in his heart His fave local indie rockers Morning Benders just signed onto Rough Trade for their next long-player, Big Echo. Time is now to trip on the new songs. With Miniature Tigers and A B and the Sea. 10 p.m., $20. Bottom of the Hill, 1233 17th St., SF. www.bottomofthehill.com

For my vintage Bettie Page still mourning the passing of the lindy-hop revival Lee Presson and the Nails keep the antics on edge, alongside veteran Southland stompers Big Sandy and His Fly-Rite Boys. And we’ll all wanna get a gander of the infamous Girl in the Fishbowl. With Project: Pimento and the Cottontails. 8 p.m. doors, $60. Bimbo’s 365 Club, 1025 Columbus, SF. www.bimbos365club.com

For our indie hip-hop homes with a penchant for a smoking party Devin the Dude wants to put you at ease and bring you home in one piece — blunts and brews intact. 9 p.m., $20. Shattuck Down Low, 2284 Shattuck, Berk. www.shattuckdownlow.com

For that indie kid with a wild streak and a secret love of FM radio Local up-and-comers Audrye Sessions might be just the ticket to check out, while Hottub bid y’all to jump in and test its waters. With Soft White Sixties and Manatee. 9 p.m., $12–$15. Uptown, 1928 Telegraph, Oakl. www.uptownnightclub.com

For my Southern crust-vamp with a pointy-toed bootie in both the burner and retro-gypsy camps Squirrel Nut Zippers skirt the definable before sinking teensy-tiny incisors into a kind of bluesy cabaret. With Steve Soto and the Twisted Hearts. 9:30 p.m., $65. Café du Nord, 2170 Market, SF. www.cafedunord.com

For that up-for-anything music fan in the mood to shake his milky bottom line You’re down with anything, as long as it’s got a groove or a bit of blue-eyed soul — so get thee to Bay-bred Brett Dennen, A.L.O., and SambaDA, all determined to get the party ‘tarded. 8 p.m., $40–$50. Fox Theater, 1807 Telegraph, Oakl. www.apeconcerts.com