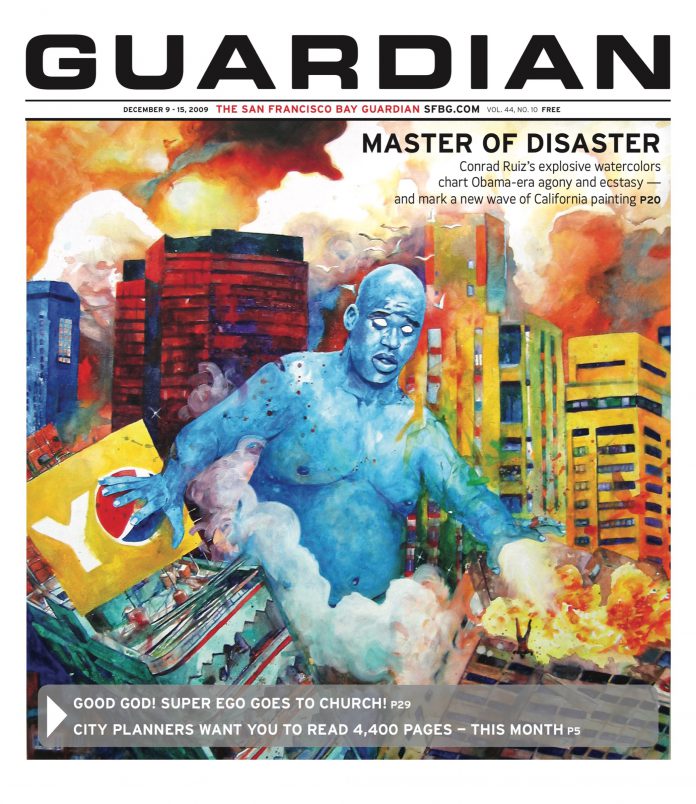 *East 14th Marsh, 1062 Valencia; 1-800-838-3006, www.themarsh.org. $20-35. Fri, 9pm; Sat, 8:30pm. Through Dec 19. Don Reed’s solo play, making its local premiere at the Marsh after an acclaimed New York run, is truly a welcome homecoming twice over. It returns the Bay Area native to the place of his vibrant, physically dynamic, consistently hilarious coming-of-age story, set in 1970s Oakland between two poles of East 14th Street’s African American neighborhood: one defined by his mother’s strict ass-whooping home, dominated by his uptight Jehovah’s Witness stepfather; the other by his biological father’s madcap but utterly non-judgmental party house. The lattershared by two stepbrothers, one a player and the other flamboyantly gay, under a pimped-out, bighearted patriarch whose only rule is “be yourself”becomes the teenage Reed’s refuge from a boyhood bereft of Christmas and filled with weekend door-to-door proselytizing. Still, much about the facts of life in the ghetto initially eludes the hormonal and naïve young Reed, including his own flamboyant, ever-flush father’s occupation: “I just thought he was really into hats.” But dadalong with each of the characters Reed deftly incarnates in this very engaging, loving but never hokey tributehas something to teach the talented kid whose excellence in speech and writing at school marked him out, correctly, as a future “somebody.” (Avila)

I Heart Hamas: And Other Things I’m Afraid to Tell You Off Market Theaters, 965 Mission; www.ihearthamas.com. $20. Thurs/10 and Sat/12, 8pm. An American woman of Palestinian descent, San Francisco actor Jennifer Jajeh grew up with a kind of double consciousness familiar to many minorities. But hersconflated and charged with the history and politics of the Middle Eastarguably carried a particular burden. Addressing her largely nonMiddle Eastern audience in a good-natured tone of knowing tolerance, the first half of her autobiographical comedy-drama, set in the U.S., evokes an American teen badgered by unwelcome difference but canny about coping with it. The second, set in her ancestral home of Ramallah, is a journey of self-discovery and a political awakening at once. The fairly familiar dramatic arc comes peppered with some unexpected asidesand director W. Kamau Bell nicely exploits the show’s potential for enlightening irreverence (one of the cleverer conceits involves a “telepathic Q&A” with the audience, premised on the predictable questions lobbed at anyone identifying with “the other”). The play is decidedly not a history lesson on the colonial project known as “the Israeli-Palestinian conflict” or, for that matter, Hamas. But as the laudably mischievous title suggests, Jajeh is out to upset some staid opinions, stereotypes and confusions that carry increasingly significant moral and political consequences for us all. (Avila)

*Loveland The Marsh, 1074 Valencia; 826-5750, www.themarsh.org. $15-$50. Thurs/10, 8pm; Sat/12, 5pm. Los Angelesbased writer-performer Ann Randolph returns to the Marsh with a new solo play partly developed during last year’s Marsh run of her memorable Squeeze Box. Randolph plays loner Frannie Potts, a rambunctious, cranky and libidinous individual of decidedly odd mien, who is flying back home to Ohio after the death of her beloved mother. The flight is occasion for Frannie’s own flights of memory, exotic behavior in the aisle, and unabashed advances toward the flight deck brought on by the seductively confident strains of the captain’s commentary. The singular personality and mother-daughter relationship that unfurls along the way is riotously demented and brilliantly humane. Not to be missed, Randolph is a rare caliber of solo performer whose gifts are brought generously front and center under Matt Roth’s reliable direction, while her writing is also something specialfully capable of combining the twisted and macabre, the hilariously absurd, and the genuinely heartbreaking in the exact same moment. Frannie Potts’s hysteria at 30,000 feet, as intimate as a middle seat in coach (and with all the interpersonal terror that implies), is a first-class ride. (Avila)

Ovo Grand Chapiteau, AT&T Park; (800) 450-1480, www.cirquedusoleil.com. $45.50-$135. Tues-Thurs, 8pm; Fri-Sat, 4 and 8pm; Sun, 1 and 5pm. Through Jan 24. The U.S. premiere of Cirque du Soleil’s latest extravaganza, written and directed by Deborah Colker, dependably sports several fine acts enmeshed in a visually buzzing insect theme. Highlights include a delighting set of juggling ants, twirling huge wedges of kiwi with their synchronized tootsies, very adorable and almost unbelievably deft; a mesmerizing and freely romantic airborne “Spanish Web” duet; and a spider traversing a “slackwire” web with jaw-dropping strength, balance and agility. The whisper-thin plot, thin even by Cirque standards, is nearly summed up in the title (Portuguese for “egg”). A very large “ovo” takes up most of the stage as the audience enters the tent. This is miraculously replaced in a flash by a smaller, though still ample one lugged around by one of three clowns (by the standards of past years, not a very inspired or absorbing bunch these three), and then snatched away amid a throng of insect types. An endoplasmic reticulum, or something, hovers a floor or two high toward the back of the stage, where the live band churns the familiar trans-inducing Euro-beats. The baseline entertainment value is solid, though the usual high jinx and overall charm are at somewhat lower ebb compared with recent years. (Avila)

Shanghai San Francisco One Telegraph Hill; 1-877-384-7843, www.shanghaisanfrancisco.com. $40. Sat, 1pm. Ongoing. To be Shanghaied: “to be kidnapped for compulsory service aboard a ship&ldotsto be induced or compelled to do something, especially by fraud or force”. Once the scene of many an “involuntary” job interview, San Francisco’s Barbary Coast is now the staging ground for Shanghai San Francisco, a performance piece slash improv slash scavenger hunt through the still-beating hearts of North Beach and Chinatown, to the edge of the Tendernob. Beginning at the base of Coit Tower, participants meet the first of several characters who set up the action and dispense clues, before sending the audience off on a self-paced jaunt through the aforementioned neighborhoods, induced and compelled (though not by force) to search for a kidnapped member of the revived San Francisco Committee of Vigilance. It’s a fine notion and a fun stroll on a sunny afternoon, but ultimately succeeds far better as a walking tour than as theatre. Because the actors are spread rather thinly on the ground, they’re unable to take better advantage of their superior vantage by stalking groups a little more closely, staging distractions along the way, and generally engaging the audience as such a little more frequently. But since Shanghai San Francisco is a constantly evolving project, maybe next time they’ll do just that. (Gluckstern)

Who’s Afraid of Virginia Woolf? Actors Theatre of SF, 855 Bush; 345-1287, www.actorstheatresf.org. $26-$40. Thurs-Sat, 8pm; Sun, 2pm. Through Dec 19. Before throwing around terms like “dysfunctional, bi-polar, codependent,” to describe the human condition became fodder for every talk show host and reality TV star, people with problems were expected to keep them tight to the chest, like war medals, to be brought out in the privacy of the homestead for the occasional airing. For George and Martha, the sort of middle-aged, academically-entrenched couple you might see on any small University campus, personal trauma is much more than a memoryit’s a lifestyle, and their commitment to receiving and inflicting said trauma is unparalleled. The claws-out audacity of mercurial Martha (Rachel Klyce) is superbly balanced by a calmly furious George (Christian Phillips), and their almost vaudevillian energy easily bowls over boy genius Biologist, Nick (Alessandro Garcia) and his gormless, “slim-hipped” wife Honey (Jessica Coghill), who at times exhibit such preternatural stillness they seem very much like the toys their game-playing hosts are using them as to wage their private war of attrition; their nervous reactions, though well-timed, coming off as mechanical in comparison to the practiced ease with which Klyce and Phillips relentlessly tear down the walls of illusion. But thanks to George and Martha’s menacing intensity, and self-immoutf8g love, this Virginia Woolf does not fail to hold the attentions of its audience captive, despite being a grueling (though never tedious) three-and-a-half hours long. (Gluckstern)

*FAT PIG Aurora Theatre, 2081 Addison, Berk; (510) 843-4822, auroratheatre.org. $15-$55. Wed/9-Sat/12, 8pm; Sun/13, 2 and 7pm. Playwright Neil LaBute has a reputation for crueltyor rather the unflinching study thereofbut as much as everyday sociopathy is central to Fat Pig, this fine, deceptively straightforward play’s real subject is human frailty: the terrible difficulty of being good when it means going decidedly against the values and opinions of your peers. Aurora Theatre’s current production makes the point with satirical flair and insight, animated by a faultless ensemble directed with snap and fire by Barbara Damashek. A conventionally handsome businessman named Tom (a brilliantly canny, vulnerable and sympathetic Jud Williford) falls for a bright, beautiful woman of more than average size named Helen (Liliane Klein, radiantly reprising the role after a production for Boston’s Speakeasy Stage). It’s the most important relationship either has had. Alone together they’re very happy. At work, however, Tom contends with relentless pressure from his coworkers, Carter (a penetrating Peter Ruocco, savoring the sadism of the locker room) and onetime dating partner Jeannie (Alexandra Creighton, devastatingly sharp at being semi-hinged). As ambivalent as Tom is about both, he feebly attempts to hide his new love from them. The separation of public and private selves leads to conflict, and the plot will turn on how Tom resolves it. Needless to say, the title’s inherent viciousness points not at Helenby far the most advanced personality on stagebut at those who would intone the phrase as well as those, like Tom, who tacitly let it work its dark magic. (Avila)

*Large Animal Games La Val’s Subterranean, 1834 Euclid, Berk; www.impacttheatre.com. $10-20. Thurs/10-Sat/12, 8pm. Impact Theatre co-presents (with Atlanta’s Dad’s Garage) the world premiere of a new play by Atlanta-based Steve Yockey. The 75-minute comedy mingles three separate subplots among a group of friends, all refracted through a mysterious lingerie shop run by an affable, somewhat impish tailor (Jai Sahai) offering new skins for exploring inner selves. There’s the spoiled rich-girl (Marissa Keltie) horrified to discover her perfect fiancé’s (Timothy Redmond) secret penchant for donning feminine undergarments; a pair of best friends (Cindy Im and Elissa Dunn) who fall out over the sexy no-English matador-type (Roy Landaverde) one brings home from a Spanish holiday; and there’s an African American woman (Leontyne Mbele-Mbong) who goes on an African safari as the logical extension of her obsession with guns. Briskly but shrewdly directed by Melissa Hillman, the agreeable cast knows what to do with Yockey’s well-honed, true-to-life repartee. The play has a touch of the magical dimension familiar to audiences who saw Skin or Octopus (both produced by Encore Theatre) but it operates here in a less self-conscious, more lighthearted way, while still nicely augmenting the subtly related themes of animal-lust, competition, self-image and possession cleverly at work under the frilly, scanty surface. (Avila)

“A Queer 20th Anniversary” Locations vary. www.circozero.org. Various days and times, Dec. 9  Jan. 31. Zero Performance presents a retrospective of two seminal pieces performed by Keith Hennessy and company, including a restaging of Saliva at the original site under a freeway South of Market.

“All of Me” Marines Memorial Theatre, 609 Sutter; 771-6900, www.marinesmemorialtheatre.com. Fri-Sat, 8pm. $47.50-$77.50. Linda Eder kicks off the Rrazz Concert Series with an evening of signature songs and holiday favorites.

“A Cathedral Christmas” Grace Cathedral, 1100 California; 392-4400, www.cityboxoffice.com. Sat-Sun, 3pm; Dec 21, 7pm. Through Dec 21. $15-$50. Celebrate the season with the Choir of Men and boys with orchestra, featuring their signature performances of favorite carols, along with sacred masterpieces and yuletide classics.