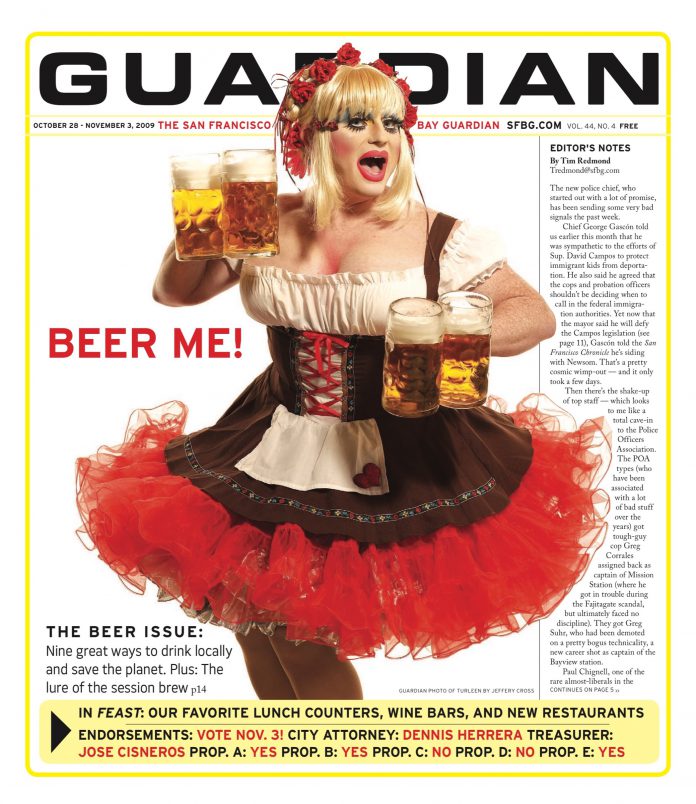 
At the Oct. 23 groundbreaking ceremony for the rebuild of San Francisco General Hospital, Mayor Gavin Newsom sang the praises of the public hospital’s staff.


"To all the men and women who work in this remarkable place that changes people’s lives each and every day … every time I come here, I realize you’re not just saving patients, you’re taking care of families," the mayor said. "It’s so difficult to see someone in pain. But to see the smile and the pride their loved ones have because of the job you guys have done is something magical."


Yet some health care workers, marked by their signature purple and yellow T-shirts, clearly weren’t feeling the magic. As Newsom waxed poetic onstage, they stood clustered in the audience displaying a banner proclaiming, "Keep Public Health Healthy." It was meant as a reminder that SEIU Local 1021, the union that represents certified nursing assistants (CNAs) and clerical workers facing significant slashes in pay in the wake of a city budget cuts, is still pushing to have their salaries restored.


On Sept. 15, 500 CNAs and clerical workers received notice that they would be laid off, although some would be reclassified at lower-paying positions, effective Nov. 15. For the CNAs being demoted, the reductions amount to an average of $15,000 annual reduction in pay. For the clerical workers facing downgrades, the cuts reflect an average loss of $5,000.


It wasn’t the first time SEIU workers turned out at one of Newsom’s public appearances. Beginning in August, union members began vocally characterizing the layoffs and demotions as a civil ights issue because they disproportionately affect women and people of color. According to a Department of Public Health assessment, 96 percent of the affected employees are people of color and 79 percent are women.


Mayoral Chief of Staff Steve Kawa insisted this wasn’t an attack on the city’s comparable-worth policy, which guarantees equal pay for work done primarily by women. "We would not do anything against comparable worth, " Kawa told the Guardian. "Even with the change in status in the wage, these workers will be making 18 percent above market."


But Sup. John Avalos framed it differently. "These people are some of the lowest paid frontline workers in the city," he pointed out a recent Board of Supervisors meeting. "I have spoken to many of them in my district. They’re often single women who are raising children, who don’t know how they’re going to survive."


After angry SEIU members made a series of boisterous appearances at Newsom’s gubernatorial campaign events, the mayor finally agreed to meet with them in talks that were mediated by San Francisco Labor Council head Tim Paulson.


"[Newsom] complained at some length during the first meeting about us attacking him," noted SEIU member Ed Kinchley. "We responded that we’re really not attacking him. What we were criticizing was a policy that goes after classifications filled predominantly by women and people of color."


The ongoing flap took a new twist at the Oct. 22 Board of Supervisors meeting, when Sups. Avalos and Chris Daly each announced plans to find funding to restore the public health workers’ salaries. Avalos proposed skimming some excess from management positions, which have swelled in recent years.


"Before cutting vital city services … we should first look to those who have the most, not to those who have the least," Avalos noted. He said he plans to ask the city controller to draft an annual salary ordinance that would reclassify top management positions in order to free enough funding to stop the demotions and wage reductions for the CNAs and clerical workers.


"I don’t know how one does that," Kawa said when asked about Avalos’ proposal. "It doesn’t make any sense to me."


Daly, meanwhile, noted that Department of Public Health Chief Financial Officer Gregg Sass had highlighted a preliminary projection for an $8 million DPH budget surplus in a Sept. 15 memo. Daly announced that he plans to request the money be flagged to go back into the department to stave off deskilling of frontline workers.


When asked if this money was available to fund the CNAs and clerical workers, Sass responded, "I don’t think it is." Emphasizing that it’s a preliminary figure, he added that "any additional funding, should it exist, is a component of the city’s overall ability to stay on budget this year and offset any shortfalls in city revenue … and address the large projected deficit for next year. I don’t see how it could be seen as ‘available’ until the city has better projections of [other tax revenue]."


The union had planned for a lengthy session with mayoral staff to continue negotiations on the same day of the supervisors’ meeting. But when Kawa learned about Avalos’ proposed legislation, he got angry and walked out, according to one SEIU member.


Asked if proposed legislation detracted from the negotiations, Kawa told us that "it made the last one difficult because it was somewhat of a surprise. And usually when you’re in good-faith negotiations, you share with the other folks the activities you’re up to so that you know that they’re actually there to negotiate in good faith."


Back at SF General after the groundbreaking ceremony, Newsom posed for photos with top public health officials, scooping shovels full of loose dirt with golden spades. The giddy atmosphere dissipated when the mayor turned around to find himself ringed by a group of reporters vying for a chance to pepper him with questions. He responded to most of their queries in typical loquacious fashion. But when the Guardian asked him to comment on Avalos’ proposed legislation, his face darkened slightly. "I don’t have any comment," he responded gruffly. Then he was whisked away for more photographs.